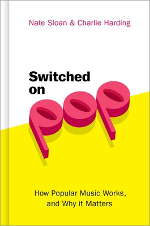 In today’s world pop music is everywhere. From grocery store aisles, to the radio, in restaurants, and everywhere in between – it’s inescapable. But we often take its popularity for granted, relegating pop music’s top hits to merely commercial fluff.

Nate Sloan and Charlie Harding argue against this assumption in their new book Switched on Pop: How Popular Music Works and Why It Matters (Oxford – December 13th, 2019), claiming that there is actually an undeniable artistry underneath all this “fluff.”

Switched on Pop looks at individual Top 40 hits over the past 20 years, ranging from Taylor Swift’s “You Belong With Me” to Drake’s “God’s Plan,” and it explains the musical techniques behind these songs, revealing surprising connections between contemporary pop music and musical styles from around the world and across history.

Sloan and Harding also delve into pop music as a whole, asserting that pop actually isn’t a genre; it’s a marketing category that encompasses everything that is commercially successful, regardless of sound.

Saxophones, drum machines, sleigh bells, and synthesizers can all co-exist on the Billboard Hot 100 as long as they have a mass of listeners. As a result, pop music is not formulaic and the trending sound of the moment is rather transient. For example, currently the sound of funk is having a moment – pop artists from The Jonas Brothers to Bruno Mars and Lizzo have all embraced funky production. Thus, the only thing truly certain about pop music is that it will change.

UPB will be closed for three weeks, starting on Tuesday, March 17th, observing instructions from county officials and the city of Berkeley to shelter in place.

No reading groups nor author events will meet through April. Check our calendar for details and updates.

These measures should slow the spread of the virus to avoid overloading public and private health services all at once.

Unfortunately, our on-line fulfillment team is also sheltering in place, which means despite previous announcements, we are NOT shipping orders until after we're again operational.

But you can still purchase eBooks and audio books through us. Distributed by Hummingbird, they include publications from the major publishing houses. Jut access the "EBOOKS/AUDIOBOOKS" menu link.

We’re riding eventualities as they unfold and cannot predict when the store will open and gatherings will resume. The Cafe Ohlone has cancelled dates through March 27th at least. Check their website for tentative dates and any further cancelations.