The Trump Files: An Account of the Trump Administration's Effect on American Democracy, Human Rights, Science and Public Health (Paperback) 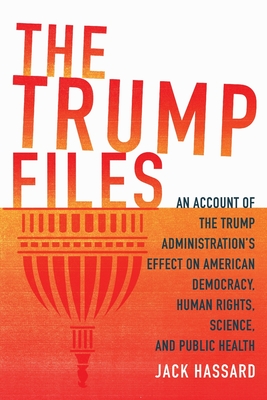 "Pained, outraged, yet ultimately hopeful that "those of us who care about free and fair elections will be out in droves" to vote, science educator Jack Hassard's sweeping indictment of Trumpism offers an exhaustive accounting of the former president's impact on American life, politics, democracy, and the globe itself" (BookLife Review).

Writing from hotly contested Georgia, Hassard (Minds on Science among other works) covers not just Trump's presidency and the violent aftermath, but also the increasingly polarized politics that paved the way for it, touching on voter suppression bills introduced during the Obama years, the Tea Party movement, and what sociologist Arlie Russell Hochschild has dubbed "The Great Paradox" "Why is hatred of government most intense among people who need government services?"

Hassard's accounting is wide-ranging, sharp-elbowed, and deeply committed to democracy and equality. With sharp, clear-eyed prose he takes on racial injustice, the Trumpist worldview (in a discussion inspired by the work of George Lakoff), how "the United States drifted toward authoritarian and autocratic rule," and most thoroughly how "science in the Trump era was diminished at the peril of the health and well-being for not only people and other living things, but Earth itself." Breaking up the wide-view perspective are of-their-moment blog posts reprinted throughout offer close-up looks at controversies concerning Russian election interference, lies about mail-in voting, and the rolling back of environmental regulations.

While some of this material will be familiar to people who keep up with the news, Hassard's rundown offers clear reminders of the breadth of Trump's challenges to our system and the passion with which those challenges have been opposed. The freshest, most persuasive material is Hassard's examination of the movement and administration's assault on science and expertise, culminating in the Covid-19 pandemic. It's tempting to describe Hassard's prose in his examination of climate issues as "scorched earth," but as he makes clear that now seems like a probable future.

The Trump Files is organized into six parts and thirteen chapters.

Hassard composes a history of a president and his administration who undermined the tenets of a liberal democracy, nearly overthrowing the American government with his Big Lie and attempted coup d' tat.