The Trump Files: An Account of the Trump Administration's Effect on American Democracy, Human Rights, Science and Public Health (Hardcover) 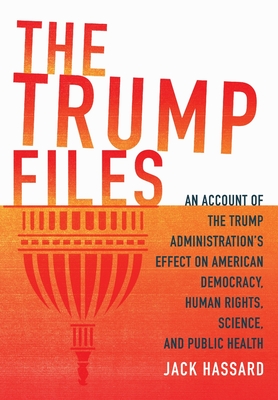 In twenty-first century United States of America, a corrupt businessman is elected president, is impeached twice while in office, directs a failed coup d tat and an attack on Congress, but still remains at-large. He's thinking about running again.

Jack Hassard, internationally known science educator, researcher and author, examines the interplay of politics and science to unravel the effects that Donald Trump and his administration had on American society.

Citizen Jack's blog writing over a six year period was the foundation to create story after story organized around six themes:

Part I: Trumpism, sets the stage with the story of how extreme polarization of American society made it possible for Trump's "America First" policy to gain the White House. The story explores how an authoritarian president led America's democracy into danger.

Part III: Scrutiny, is a story of Donald Trump's chronic violation of his oath of office. This is a story of corruption as seen by one citizen from Georgia

Part IV: Science, is a science educator's story of how Trump's administration dismantled and diminished science in all areas of government at the peril of the Earth's air, water, land, climate, and-most importantly-citizens.

Part V: COVID-19, is the tragedy of Donald Trump's failure as a leader during the SARS-CoV-2 pandemic and the impact on millions of Americans. The story explains how viruses come about, how they can be mitigated, and what happens if people are not told the truth about infectious diseases.

Part VI: Departure, describes how Trump promoted the "Big Lie Conspiracy" that the 2020 election was stolen from him. It's a story of how Trump instigated political violence by sending right-wing mobs to seditiously attack the nation's Capitol, which led to his second impeachment for causing an insurrection.

Although not a journalist or media personality, Citizen Jack uses his researcher, blogger, professor, and citizen credentials to create a political science story about a grim period when Donald Trump was president. Jack weaves his abilities as an accomplished author and teacher of science, with citizen diplomacy, blogging, and the local politics of Georgia. Jack composes a history of a president and his administration who undermined the tenets of a liberal democracy, nearly overthrowing the American government with his Big Lie and attempted coup d' tat.

Dive into Citizen Jack's Gripping and Detailed Story of the Trump Years.