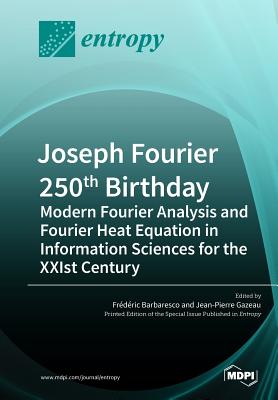 For the 250th birthday of Joseph Fourier, born in 1768 in Auxerre, France, this MDPI Special Issue will explore modern topics related to Fourier Analysis and Heat Equation.

Modern developments of Fourier analysis during the 20th century have explored generalizations of Fourier and Fourier-Plancherel formula for non-commutative harmonic analysis, applied to locally-compact, non-Abelian groups. In parallel, the theory of coherent states and wavelets has been generalized over Lie groups. One should add the developments, over the last 30 years, of the applications of harmonic analysis to the description of the fascinating world of aperiodic structures in condensed matter physics. The notions of model sets, introduced by Y. Meyer, and of almost periodic functions, have revealed themselves to be extremely fruitful in this domain of natural sciences.

The name of Joseph Fourier is also inseparable from the study of the mathematics of heat. Modern research on heat equations explores the extension of the classical diffusion equation on Riemannian, sub-Riemannian manifolds, and Lie groups. In parallel, in geometric mechanics, Jean-Marie Souriau interpreted the temperature vector of Planck as a space-time vector, obtaining, in this way, a phenomenological model of continuous media, which presents some interesting properties.

The content of this Special Issue will highlight papers exploring non-commutative Fourier harmonic analysis, spectral properties of aperiodic order, the hypoelliptic heat equation, and the relativistic heat equation in the context of Information Theory and Geometric Science of Information.