Rising Out of Hatred: The Awakening of a Former White Nationalist (Large Print / Paperback) 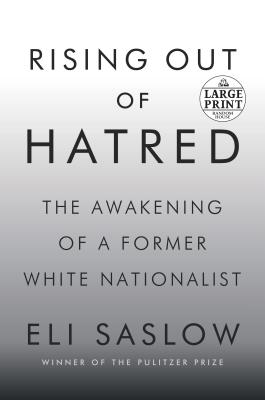 From a Pulitzer Prize-winning reporter, the powerful story of how a prominent white supremacist changed his heart and mind. This is a book to help us understand the American moment and to help us better understand one another.

“The story of Derek Black is the human being at his gutsy, self-reflecting, revolutionary best, told by one of America’s best storytellers at his very best. Rising Out of Hatred proclaims if the successor to the white nationalist movement can forsake his ideological upbringing, can rebirth himself in antiracism, then we can too no matter the personal cost. This book is an inspiration.”
—Ibram X. Kendi, National Book Award-winning author of Stamped from the Beginning: The Definitive History of Racist Ideas in America

Derek Black grew up at the epicenter of white nationalism. His father founded Stormfront, the largest racist community on the Internet. His godfather, David Duke, was a KKK Grand Wizard. By the time Derek turned nineteen, he had become an elected politician with his own daily radio show—already regarded as the "the leading light" of the burgeoning white nationalist movement. "We can infiltrate," Derek once told a crowd of white nationalists. "We can take the country back."

Then he went to college. At New College of Florida, he continued to broadcast his radio show in secret each morning, living a double life until a classmate uncovered his identity and sent an email to the entire school. "Derek Black ... white supremacist, radio host ... New College student???" The ensuing uproar overtook one of the most liberal colleges in the country. Some students protested Derek's presence on campus, forcing him to reconcile for the first time with the ugliness of his beliefs. Other students found the courage to reach out to him, including an Orthodox Jew who invited Derek to attend weekly Shabbat dinners. It was because of those dinners—and the wide-ranging relationships formed at that table—that Derek started to question the science, history, and prejudices behind his worldview. As white nationalism infiltrated the political mainstream, Derek decided to confront the damage he had done.

Rising Out of Hatred tells the story of how white-supremacist ideas migrated from the far-right fringe to the White House through the intensely personal saga of one man who eventually disavowed everything he was taught to believe, at tremendous personal cost. With great empathy and narrative verve, Eli Saslow asks what Derek Black's story can tell us about America's increasingly divided nature.

“Rising Out of Hatred is a disturbing look at the spread of that extremism — and how it is planted and cultivated in the fertile soil of American bigotry. And yet, Saslow’s vivid storytelling also conveys that during this period of deepening racial division, there is the possibility of redemption."
—Washington Post

“This is a double portrait: of a worse America, and of a better one. Neither of them has yet come to pass, but each of them might.  Thanks to reporting that is both truthful and humane, we see in one young man's decision a guide to the choices that face a generation and a country."
—Timothy Snyder, New York Times bestselling author of On Tyranny and The Road to Unfreedom

“The story of Derek Black is the human being at his gutsy, self-reflecting, revolutionary best, told by one of America’s best storytellers at his very best. Rising Out of Hatred proclaims if the successor to the white nationalist movement can forsake his ideological upbringing, can rebirth himself in antiracism, then we can too no matter the personal cost. This book is an inspiration.”
—Ibram X. Kendi, National Book Award-winning author of Stamped from the Beginning: The Definitive History of Racist Ideas in America

"No one can match Eli Saslow's skill at telling the most improbable, humane, and riveting tales of our time. Anyone despairing at the hate that has fueled so much of America's politics ought to read this unforgettable story."
—Jane Mayer, New York Times bestselling author of Dark Money

"This is a beautiful and important book. I am a changed person for having read it. If my father were still alive, there would be no book I’d rather discuss with him than this. There are gorgeous, brilliant souls at work in this powerfully told story, and they are everything that’s right and promising about our future.”
—Elisha Wiesel, son of Elie and Marion Wiesel and chairman of the WVN Elie Wiesel Award

“Rising Out of Hatred is an unforgettable story - fair, humane, unflinching, and brimming with insights about American racism and the white nationalist movement. Saslow has given us an instant classic of narrative writing and reporting.”
—Steve Coll, New York Times bestselling author of Directorate S. and Ghost Wars, winner of the Pulitzer Prize