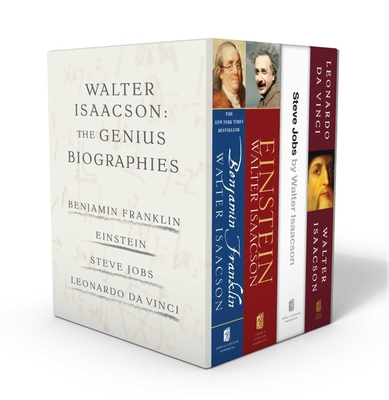 “If anybody in America understands genius, it’s Walter Isaacson.” —Salon

Einstein:
How did his mind work? What made him a genius? Isaacson’s biography of Albert Einstein—also the basis for the ten-part National Geographic series starring Geoffrey Rush—shows how Einstein’s scientific imagination sprang from the rebellious nature of his personality. His fascinating story is a testament to the connection between creativity and freedom.

Leonardo da Vinci:
History’s consummate innovator and most creative thinker. Isaacson illustrates how Leonardo’s genius was based on skills we can improve in ourselves, such as passionate curiosity, careful observation, and an imagination so playful that it flirted with fantasy.

Walter Isaacson, a professor of history at Tulane, has been CEO of the Aspen Institute, chair of CNN, and editor of Time. He is the author of Leonardo da Vinci; The Innovators; Steve Jobs; Einstein: His Life and Universe; Benjamin Franklin: An American Life; and Kissinger: A Biography, and the coauthor of The Wise Men: Six Friends and the World They Made. Visit him at Isaacson.Tulane.edu.