To Raise a Boy: Classrooms, Locker Rooms, Bedrooms, and the Hidden Struggles of American Boyhood (Hardcover) 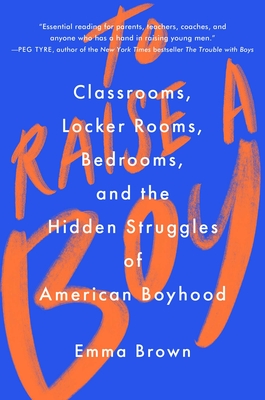 “To Raise a Boy is a clear-eyed and sometimes shocking view of the world that we have created for boys, and a call for change.” —Peg Tyre, author of the New York Times bestseller The Trouble with Boys

A journalist’s searing investigation into how we teach boys to be men—and how we can do better.

How will I raise my son to be different? This question gripped Washington Post investigative reporter Emma Brown, who was at home nursing her six-week-old son when the #MeToo movement erupted. In search of an answer, Brown traveled around the country, through towns urban and rural, affluent and distressed. In the course of her reporting, she interviewed hundreds of people—educators, parents, coaches, researchers, men, and boys—to understand the challenges boys face and how to address them.

What Brown uncovered was shocking: 23 percent of boys believe men should use violence to get respect; 22 percent of an incoming college freshman class said they had already committed sexual violence; 58 percent of young adults said they’ve never had a conversation with their parents about respect and care in sexual relationships. Men are four times more likely than women to die by suicide. Nearly 4 million men experience sexual violence each year.

From the reporter who brought Dr. Christine Blasey Ford’s story to light, To Raise a Boy combines assiduous reporting, cutting-edge scientific research, and boys’ powerful testimonials to expose the crisis in young men’s emotional and physical health. Emma Brown connects the dots between educators, researchers, policy makers, and mental health professionals in this tour de force that upends everything we thought we knew about boys.

Johns Hopkins chair of the Department of Population, Family, and Reproductive Health Robert Blum says, “The story of boys has yet to be told, and I think it’s a really important story.” Urgent and revelatory, To Raise a Boy begins to tell that story.

Emma Brown is an investigative reporter at The Washington Post. In her life before journalism, she worked as a wilderness ranger in Wyoming and a middle school math teacher in Alaska. She lives with her husband and two children in Washington, DC.

“A groundbreaking exploration with clear recommendations on how to better raise and support boys.”
— Library Journal (starred review)

"So many of the problems of our times can be traced back to our suffocatingly narrow definition of masculinity. We don't talk about this nearly enough. And when we do, we talk about it badly. TO RAISE A BOY lays out the problems alongside the solutions, giving us tools we can use right now—to do better by boys and girls, men and women."
—Amanda Ripley, author of the New York Times bestseller The Smartest Kids in the World

"An extraordinary expose on the issues that adolescent boys face. It is one of the finest if not the finest piece of writing that I have read on adolescent boys in the United States."
—Robert Blum, Professor at Johns Hopkins University Bloomberg School of Public Health

"We talk a lot about what men do to each other and to women, but we don't spend much time thinking about why men are the way they are. This book does that. It comes along at exactly the right time."
—Tony Dokoupil, CBS This Morning

"This book is necessary and the timing couldn't be more perfect."
—Mary Gordon, Founder of Roots of Empathy

"Brown offers a study of what it means to be a boy in America today—and the outdated notions of masculinity that continue to let our boys down."
— Washington Monthly