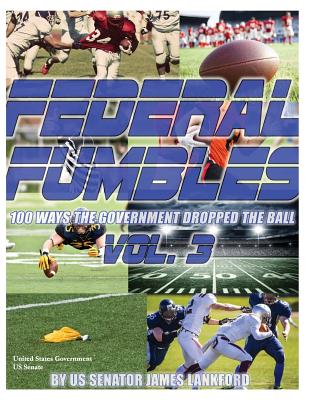 By United States Government Us Senate
$16.79

In the tradition of Senator Tom Coburn's Wastebook, this is Senator James Lankford's Federal Fumbles: 100 Ways the Government Dropped the Ball Volume 3, 2017 Edition.Over the last 11 months, Congress and the new Administration have worked to roll back many of the burdensome regulations put in place by the last Administration and highlighted in previous editions of Federal Fumbles. Using the Congressional Review Act, Congress was able to repeal 14 overly burdensome or needless regulations put in place during the waning days of the Obama Administration. As a result, the businesses or individuals affected by the regulations will save $34.8 billion and more than 4.2 million hours of paperwork.As is custom for new Administrations, in January 2017 the President ordered a temporary freeze on the implementation of new regulations.3 The Administration also reviewed existing regulations and found more than 850 regulatory actions that could be revoked or withdrawn.4 In just the first half of 2017, federal agencies withdrew or rolled back 469 agency actions that had been announced in the fall of 2016 and cut in half the number of planned regulations that will have an impact of more than $100 million a year on our economy.While we made tremendous progress in alleviating the regulatory burden on the American economy, we have work to do in reforming how the federal government utilizes your tax dollars. In FY16, the federal government collected $3.267 trillion in taxes. That includes income taxes, corporate taxes, Social Security, and unemployment. Unfortunately, it spent $3.852 trillion, a deficit of $584 billion. Since FY09, the federal government spent $7.2 trillion more than it has taken in. Congress has yet to agree on how to stop overspending, which is why the federal government is almost $20 trillion in debt today.As Congress and the Administration turn to a new year, it is incumbent upon both to display the courage and the willingness to make the difficult decisions that will rein in our out-of-control federal spending. It is unacceptable that a child born in the US today will become a citizen of a country in which his or her share of the national debt is more than $165,000. Without a major change in the way Congress operates, that amount will only go up in the years ahead.Included in Federal Fumbles is just a sampling of instances where federal agencies or departments have wasted or inefficiently used billions of your dollars. The program and grant funding discussed in this book has already been allocated or spent and cannot be recovered. But highlighting it here provides lessons for agencies and hopefully encourages Congress to utilize its oversight and legislative authority to prevent future waste and misuse of federal tax dollars.All Members of Congress and their staffs should be able to utilize this book as they consider budget requests, hold oversight hearings, and discuss reform legislation. As the people's representative and voice in Washington, it is our responsibility to provide a check against the spending and regulatory habits of federal agencies. For federal agencies, this book provides multiple opportunities to improve their operations. Many of the grants highlighted in this book are instances in which agencies have funded projects either outside their domain or without a direct national interest. Several of the entries in this book involve instances in which agencieshave spent taxpayer dollars before engaging in effective planning to ensure the item or program is feasible, cost effective, or even possible. That can and should be easily fixed. Americans rightly expect great things from their leaders in Washington. I offer this book as a guide for elected officials of both parties to identify areas of improvement so we may come together to do the work our constituents expect and our country deserves.