Unleaded: How Changing Our Gasoline Changed Everything (Paperback) 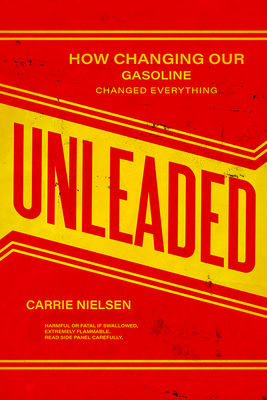 When leaded gasoline was first developed in the 1920s, medical experts were quick to warn of the public health catastrophes it would cause. Yet government regulators did not heed their advice, and for more than half a century, nearly all cars used leaded gasoline, which contributed to a nationwide epidemic of lead poisoning. By the 1970s, 99.8% of American children had significantly elevated levels of lead in their blood.

Unleaded tells the story of how crusading scientists and activists convinced the U.S. government to ban lead additives in gasoline. It also reveals how, for nearly fifty years, scientific experts paid by the oil and mining industries abused their authority to convince the public that leaded gasoline was perfectly harmless.

Combining environmental history, sociology, and neuroscience, Carrie Nielsen explores how lead exposure affects the developing brains of children and is linked to social problems including academic failure, teen pregnancies, and violent crime. She also shows how, even after the nationwide outrage over Flint’s polluted water, many poor and minority communities and communities of color across the United States still have dangerously high lead levels. Unleaded vividly depicts the importance of sound science and strong environmental regulations to protect our nation’s most vulnerable populations.

CARRIE NIELSEN is an associate professor of biology and environmental science at Cabrini University in Radnor, Pennsylvania. Her research interests include environmental justice, science pedagogy, interdisciplinary teaching, watershed management, nutrient cycling in forest soils, and faith perspectives on environmental sustainability. She lives in Bryn Mawr, Pennsylvania with her husband and two daughters.

"Nielsen has developed a sophisticated analysis of childhood lead exposure. One of the real joys of this book is that it is written in an accessible style and makes an important contribution to the historical literature on childhood lead poisoning."
— Gerald Markowitz

"Carrie Nielsen’s Unleaded provides a scientific perspective on an early-twentieth-century federal policy that misguidedly allowed the rapid rise and then, sensibly, the decline of a single product, leaded gasoline. The outcomes of these policy decisions changed the global environment and the socioeconomic fate of millions of people, mainly in the U.S. but also worldwide."
— Howard Mielke