Crash Course: From the Good War to the Forever War (War Culture) (Hardcover) 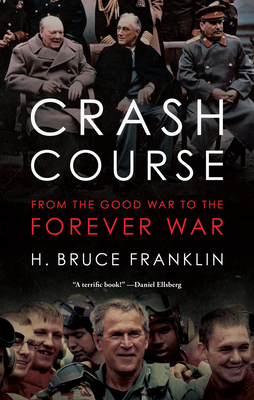 Growing up during the Second World War, H. Bruce Franklin believed what he was told: that America’s victory would lead to a new era of world peace. Like most Americans, he was soon led to believe in a world-wide Communist conspiracy that menaced the United States, forcing the nation into a disastrous war in Korea. But once he joined the U.S. Air Force and began flying top-secret missions as a navigator and intelligence officer, what he learned was eye-opening. He saw that even as the U.S. preached about peace and freedom, it was engaging in an endless cycle of warfare, bringing devastation and oppression to fledgling democracies across the globe.

Now, after fifty years as a renowned cultural historian, Franklin offers a set of hard-learned lessons about modern American history. Crash Course is essential reading for anyone who wonders how America ended up where it is today: with a deeply divided and disillusioned populace, led by a dysfunctional government, and mired in unwinnable wars. It also finds startling parallels between America’s foreign military exploits and the equally brutal tactics used on the home front to crush organized labor, antiwar, and civil rights movements.

More than just a memoir or a history book, Crash Course gives readers a unique firsthand look at the building of the American empire and the damage it has wrought. Shocking and gripping as any thriller, it exposes the endless deception of the American public, and reveals from inside how and why many millions of Americans have been struggling for decades against our own government in a fight for peace and justice.

H. BRUCE FRANKLIN is a former Air Force navigator and intelligence officer, a progressive activist, and the John Cotton Dana Professor of English and American Studies, emeritus at Rutgers University in Newark, New Jersey. He is the author or editor of nineteen books, and has received lifetime achievement awards from the American Studies Association and other major academic organizations.

"It's especially stunning for me personally, to read Franklin's gripping account of the era we both lived through--three years apart in age--and to realize that we followed the same unusual trajectory in beliefs and attitudes: both committed Cold Warriors at the outset--my service in the Marine Corps and working on nuclear war plans in the Pentagon overlapping his active service in the Strategic Air Command rehearsing the catastrophic enactment of such plans--his disillusion with the Vietnam war and his turn to active resistance shortly preceding my own. Readers of any age will find this an exciting and startlingly self-aware memoir of a life transformed in our dangerous epoch, and most will find in it radically new perspectives on these perilous times, up to the present mind-boggling moment. A terrific book!"
— Daniel Ellsberg

"Only the late great Howard Zinn comes close to H.Bruce Franklin as truth-telling historian whose 'the personal is political' oeuvre should be read by every American, left or right, who aspires to be informed beyond headlines and rumor. Franklin’s Crash Course: From the Good War to the Forever War, meticulously researched, factually inarguable, is also a fascinating memoir in which the past is always prologue to the nearly out-of-body experience in which we find ourselves today. From 1939 through WWII to Korea to Vietnam to Iraq to Afghanistan to Syria to whatever is next: isn’t it time we figure out how we got here? May H. Bruce Franklin’s incendiary Crash Course crash into discussion on every street corner, in every board room, classroom, and bedroom in these our United States, and in the world beyond."
— Jayne Anne Phillips

"Two threads are skillfully interwoven in this absorbing memoir: the record of a remarkable life, with rich and varied experience; and astute analysis of the background of critical historical events. The outcome is a fascinating picture of post-World War II America, all under the grim shadow of 'forever war.'"
— Noam Chomsky

“This is a deeply personal and compelling account of Franklin’s lifelong entanglement with America’s perpetual war state, from his youthful enthusiasms, to his years of flight in the Strategic Air Command, to his sustained resistance to the Vietnam War, which changed his life in so many ways.  Franklin has been one of the major scholars of America’s post-WWII commitment to war as policy, and here we learn how that happened. It’s a rousing and inspirational life story!”
— Kim Stanley Robinson

"A scorching overview of the militarization of America that is simultaneously the engrossing autobiography of an historian who came of age in World War Two and the early Cold War years. Crash Course is a vivid and sobering eyeopener for readers at every level from students to fellow seniors to everyone in between."
— John Dower

"A required course for everyone concerned about how militarization has shaped American society and national identity from World War II through interventions in Korea and Vietnam to the current endless war on terror. Especially engaging is the interweaving of personal memoir and political analysis, of social life and foreign policy, by one of our greatest myth busters."
— Amy Kaplan

"Brooklyn boy, New York Longshoreman, US Air Force Navigator, English Professor, and human rights and anti-war activist, H. Bruce Franklin is one of our most important and enduring public intellectuals. Part memoir and part historical analysis, Franklin’s newest book explains how our 'glorious atomic victory in World War II' carried us relentlessly into the disastrous Vietnam War and our present campaigns in the Middle East and Afghanistan. Will we ever learn? Crash Course should be required reading by every American."
— John Carlos Rowe

"A passionate activist scholar, Franklin skillfully harnesses his lively and scrupulously candid autobiography to a deeply researched history of the emergence in the U.S. since World War II of what he calls the Forever War, which he places in compelling counterpoint to the growth of the wide-spread anti-war movement and allied progressive causes to which he himself was an important contributor.  A terrific read."
— Michael Cowan

"Franklin’s mastery of the craft of writing has created a book where each element enhances the essential nature of the other. The story he tells here describes not only an epoch in the history of a nation and an individual, but also the consciousness that created that history."
— CounterPunch

"?Broken Bombers – How the U.S. Military Covered Up Fatal Flaws in the B-47 Stratojet with Disastrous Results," by H. Bruce Franklin
— Military History Now

“I was spellbound. . . . Franklin’s story of his inspiring life. . .is reminiscent of the first American memoir, The Autobiography of Benjamin Franklin. Like Benjamin’s, Bruce Franklin’s purpose here is to teach. Ben wanted me to improve myself; Bruce wants me to think politically. He admonishes us to improve the world.”
— Amherst Magazine

"This thought-provoking book will be of interest to readers seeking to understand America’s 20th-century history and its ongoing war culture."
— Publishers Weekly

"Military History Inside Out," War Scholar interview with Bruce Franklin

— Military History Inside Out

"[Franklin] has spent his adult life tilting at windmills, and our current situation suggests not much has come of his efforts, and those of millions of others. But, along with his wife Jane, whom he praises generously as his partner in activism and for her inspiration to him, he is persistent, and courageous, and has been around the block fighting the forces of brutality and militarism. We should hope to see more of his excellent scholarship and lucid writing in future years."
— Washington Babylon

"[Crash Course] is a blend of the life he's led and of the world around him since he was a kid. It's an irreverent story."
— Veterans for Peace

"Crash Course is a highly entertaining read, and Franklin’s talent as a writer is unmistakable."
— The VVA Veteran

"This book should be read widely, particularly by younger people wondering where their own lives, and their country, has been and may be heading....Crash Course is a very good course of study. I recommend it most highly."
— Logos Journal

"At heart, this is a fascinating book and well worth reading."
— H-Net

"How We Launched Our Forever War in the Middle East" by H. Bruce Franklin
https://www.counterpunch.org/2019/09/20/how-we-launched-our-forever-war-in-the-middle-east/
— CounterPunch Magazine

"Interchange – Tell It Slant: The Truth of the Bombs Bursting in Air" interview with H. Bruce Franklin
https://wfhb.org/news/interchange-tell-it-slant-all-the-truth-about-forever-war/
— Interchange

"The best book I read in 2019 is H. Bruce Franklin’s Crash Course: From the Good War to the Forever War.  Franklin, who served in the U.S. Air Force in the 1950s before becoming an English professor, cultural historian, and an outspoken opponent of the Vietnam War, is devastating in his critique of the military-industrial complex in this memoir.  I recommend it highly to all Americans who want to wrestle with tough truths."
— Bracing Views

"Crash Course is an absolutely thrilling odyssey from the secret insides of humankind’s deadliest air force bombers to at-the-gates picket lines demanding their demise. The range of Bruce Franklin’s experiences and his powers as a storyteller are as astonishing as his transformation from a man of war to a Gandhian peacemaker. This is a fast, moving book we all need to read on the road to saving our planet and our souls. Don’t miss it!"
— Harvey Wasserman

"What Is Covid-19 Trying to Teach Us?" by H. Bruce Franklin
— CounterPunch Magazine

"A fascinating examination of a dark transformation in American history."
— The Historian

"We read Crash Course for the autobiography of an intellect. Franklin is one of twentieth-century America’s consummate intellectuals, an embodiment of mind and practice, praxis if you will, that transcends career and celebrity."

Dr. H. Bruce Franklin: “Ever Since World War II, The U.S. Has Assumed More and More of the Hallmarks of a Fascist State” by Moshen Abdelmoumen
https://ahtribune.com/interview/4377-bruce-franklin.html
— American Herald Tribune

"What Happened to the 'World of Tomorrow'?" An interview with H. Bruce Franklin
— Join Activism

"Ready for Another Game of Russian Roulette?," by H. Bruce Franklin
— Counterpunch