And She Came Tumbling Down: Breaking the Bonds of Alcohol and Creating a Life of Freedom (Hardcover) 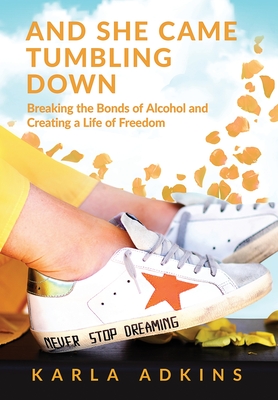 "I started off by giving alcohol a job... to help me with anxiety at social events. Then I started promoting it and giving it more responsibilities, and it just started weaving its way into my world."

As a teenager in high school and college, Karla Adkins suffered from anxiety and debilitating panic attacks. Alcohol made her feel normal; it was the answer to her need to fit in and feel calm. Besides, everyone drank, so what was the harm? She counted on it to help her relax and relieve stress. Navigating the transition to adulthood and her first job after college, Adkins began drinking even more, though alcohol failed to numb the panic she felt that her life was spiraling out of control.

A stint in rehab helped temporarily, but a layoff from her job soon put her on an emotional rollercoaster, worsening her anxiety. Adkins continued struggling with her alcohol use and at the age of 37, found herself in a hospital bed with acute liver failure. It was the catalyst for her to learn the power of shining a light on shame, and to embark on a journey leading to sobriety and healing.

No one starts drinking with the intention to become addicted. Yet, extreme health issues can happen to anyone who drinks. Alcohol doesn't care who you are or how much money you have. In this achingly honest account, Adkins offers hope and inspiration to anyone questioning their relationship with alcohol, and those whose lives have been shattered. It's not that you can't drink anymore...it's that you don't have to drink anymore.