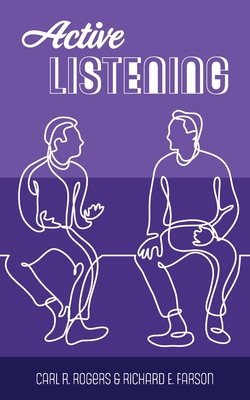 Active Listening is a short 1957 work by Drs. Carl R. Rogers and Richard E. Farson, two influential American psychologists. The work brings the counselling technique of active listening to the layperson, demonstrating how it can be applied to interactions between an employee and employer.

Carl R. Rogers (1902-1987) was one of the pioneers of the "client-centered" approach to psychotherapy. He is considered one of the founding fathers of modern psychotherapy research and is widely regarded among others in the field as the most influential psychotherapist of all time - viewed even more highly than Sigmund Freud. Dr. Rogers served as a professor of psychology at the University of Chicago, where he set up the university's counselling and research clinic, the Industrial Relations Center. He wrote many books on psychotherapy, and in later years, travelled the world to bring his theories to areas of great political and social strife like Northern Ireland, South Africa, and Brazil.

Richard E. Farson (1926-2017) had already completed his bachelor's and master's degrees when he met Dr. Rogers in 1949. Dr. Rogers invited Farson to continue his studies with him at the University of Chicago. Farson became Dr. Rogers' research assistant while he completed his Ph.D. in psychology and began counselling at the Industrial Relations Center. Dr. Farson held leadership positions in a number of research institutions. He co-founded the Western Behavioral Sciences Institute, where he served as president and CEO. He was later appointed as the founding dean of the California Institute of the Arts School of Design and served as president of the Esalen Institute.

Drs. Rogers and Farson collaborated on many projects, including 1957's Active Listening. They also led a 16-hour group therapy session that was recorded and released as a film called Journey Into Self. The film won the 1968 Academy Award for Best Documentary.

Active Listening describes a method of communication used in counselling and conflict resolution. Rather than serving as a passive participant in a conversation, active listeners take a functional role in helping the speaker to work out their issues. As the speaker shares, the listener repeats back what they've heard in their own words. This both confirms that they've heard the speaker and verifies that they understand.

Unlike the way many of us instinctively communicate - trying to get another to see things from our own perspective - active listening requires that we see things from the speaker's perspective. The listener must address not only the meaning of the words, but also the feeling behind them, in order to make the speaker truly feel heard. These feelings can be conveyed through words, tone, volume, body language, and even breathing. This method is not without risks. It can be tempting to lose your sense of self in the practice of sensing the feelings of another person. As Drs. Rogers and Farson put it, "It takes a great deal of inner security and courage to be able to risk one's self in understanding another."

In contrast to many psychological texts, Active Listening is written for the non-clinician or psychologist. In plain, everyday language, the book explains both the concepts of active listening and how they can be applied to the workplace. Employers who engage in active listening, the book argues, can help employees to become more cooperative, less argumentative, and clearer in their own communication. While the book is written in the context of the employee/employer relationship, the technique can be applied to all relationships in our lives.

The concept is still highly influential, and Drs. Rogers and Farson's ideas about client-centered psychology are used in clinical practice today.