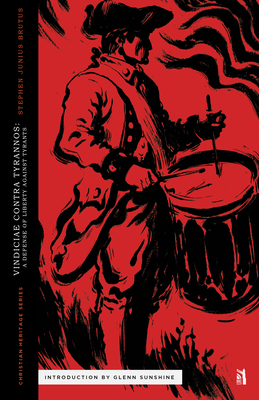 "Despite its brevity, the Vindiciae's sharp defense of the right of subjects to resist unjust or ungodly rulers even to the point of armed rebellion helped shape the political theories of John Locke in England and the American Founding Fathers. Its arguments on the rights and responsibilities of rulers and subjects continue to be relevant today as we consider the limits of the power of the government and the rights of citizens to oppose governmental overreach." Dr. Glenn Sunshine, from the Introduction

In 1572, Roman Catholic soldiers slaughtered thousands of French Huguenots for their Protestant faith. This calamity forced many Protestants to ask whether taking up arms against a king was even lawful. Many Christians thought that even in the case of persecution, kings had absolute power and lesser magistrates had no right to resist them.

Vindiciae Contra Tyrannos: A Defense of Liberty Against Tyrants, written by an anonymous Huguenot, is a powerful tract that makes a case for why Christians can sometimes lawfully resist and fight against tyrants and persecutors of the faith. The apostles told the Jews that they needed to obey God rather than man when it came to the Gospel, and to this day many Christians need to be reminded that men only derive their power from God and there are indeed times when resisting the authorities may be lawful and even biblically required. This tract is thoroughly biblical and a great testament to the courage and convictions of our fathers in the faith.

"Kings must be obeyed for God's cause, and not against God, and then, when they serve and obey God, and not otherwise. . . That sentence of God Almighty must always remain irrevocably true: 'I will not give My glory to any other, ' (Is. 42:8), that is, no man shall have such absolute authority." From the Vindiciae