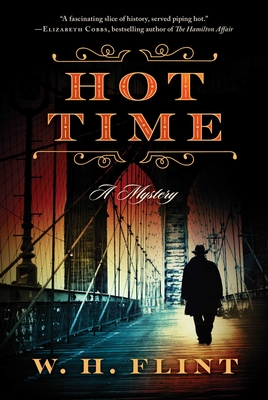 For fans of The Knick, The Alienist, and The Last Days of Night, an entertaining, atmospheric crime thriller set in the Gilded Age.

New York, August 1896. A “hot wave” has settled on the city with no end in sight, leaving tempers short and the streets littered with dead horses felled by the heat. In this presidential election year, the gulf between rich and poor has political passions flaring, while anti-immigrant sentiment has turned virulent. At Police Headquarters, the gruff, politically ambitious commissioner Theodore Roosevelt has been struggling to reform his notoriously corrupt department. Meanwhile, the yellow press is ready to pounce on the peccadilloes of the Four Hundred, the city’s social elite—the better to sell papers with lurid stories and gossip or perhaps profit from a little blackmail on the side. When the body of Town Topics publisher William d’Alton Mann is found at the foot of the Brooklyn Bridge, any number of his ink-spattered victims may have a motive.

Hot Time is an immensely entertaining, deeply researched, and richly textured historical novel set in a period that reflects our own, with cameos by figures ranging from financier J. P. Morgan to muckraking journalist Jacob Riis. Our guides through New York's torrid, bustling streets are Otto “Rafe” Raphael from the Lower East Side, one of the first Jewish officers in the heavily Irish force, who finds as many enemies within the department as outside it; Minnie Kelly, the department's first female stenographer; Theodore Roosevelt himself; and the plucky orphan Dutch, one of the city's thousands of newsboys, who may have seen too much.

W. H. Flint is the pen name of an author of acclaimed popular nonfiction histories of Theodore Roosevelt, J. P. Morgan, and the Gilded Age. This is his first novel. A regular reviewer for the Wall Street Journal, he lives in Jackson, Mississippi, and San Miguel de Allende, Mexico.

"A suspenseful and satisfying escapade, worthy of its intriguing setting and larger-than-life supporting cast . . . The pseudonymous author of Hot Time has written about Roosevelt and Morgan in previous books, and he evokes the era well." —Tom Nolan, Wall Street Journal

“Flint makes good use of his historical knowledge in this superior fiction debut. . . . Fans of Lyndsay Faye’s Timothy Wilde books will be enthralled.”—Publishers Weekly, starred review

“Hot Time is as sizzling as a heat wave. . . . A gift from literary heaven.“—David Rothenberg, WBAI

"Hot Time is a highly compelling murder mystery with elements of a thriller. . . . The book’s greatest achievement, however, is its remarkable depiction of late nineteenth-century Manhattan and its inhabitants. . . . It’s a novel where the fiction not only entertains and thrills, but breathes life, and its own form of truth, into the historical record.”—Jackson Clarion Ledger

“This is a bold and confident work, featuring not only Theodore Roosevelt in a major role, but many cameos by an extensive real-life cast.”—Hattiesburg American

"Hot Time is an extraordinary, beautifully written book that has everything readers look for in a period mystery: thorough research, a fast-moving plot, fascinating characters, believable dialogue, and a challenging puzzle. The descriptions of 1896 New York City are spellbinding, and so are the players—many of them real historical figures. ‘I couldn’t put it down’ has become a cliché, but in this case it’s true. I loved it.”—John M. Floyd, Edgar nominee, 2021 Shamus Award winner, and four-time Derringer Award winner

"A fascinating slice of history, served piping hot. Flint is an amazing storyteller. Readers will want to dash after him down every dark alleyway."—Elizabeth Cobbs, bestselling author of The Hamilton Affair

“A captivating historical page-turner! Old New York, along with many historical figures, come alive on the pages of this intricately plotted mystery.”—Dianne Freeman, award-winning author of the Countess of Harleigh mystery series

“More than a murder mystery, Hot Time is a whodunnit that becomes a fast moving and suspenseful chase thriller. The characters are excellently drawn, coming alive on the page. I am blown away by W. H. Flint’s immaculate research, his creation of characters, his depictions of real people from that time who feature—Theodore Roosevelt, J. P. Morgan, Minnie Gertrude Kelly, and others. This novel will tell you more about what life was really like for New Yorkers in the latter part of the nineteenth century that any work of nonfiction.”— Jim Eldridge, author of the Museum Mysteries series

"Phenomenal  . . . The author does a fantastic job of setting the scene for the reader . . . and the characters were so well-developed and engaging that I hope they make a return in another installment.  If you love historical mystery murders, you do not want to miss out on this excellent read by author W. H. Flint."—Girl Lost in a Book