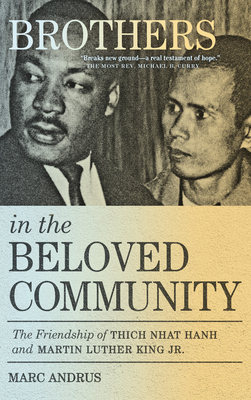 The never-before-told story of the friendship between Martin Luther King Jr. and Thich Nhat Hanh—icons who changed each other and the world

The day after Martin Luther King Jr. was assassinated in 1968, Thich Nhat Hanh wrote a heartbroken letter to their mutual friend Raphael Gould. He said: "I did not sleep last night. . . . They killed Martin Luther King. They killed us. I am afraid the root of violence is so deep in the heart and mind and manner of this society. They killed him. They killed my hope. I do not know what to say. . . . He made so great an impression in me. This morning I have the impression that I cannot bear the loss."

Only a few years earlier, Thich Nhat Hanh wrote an open letter to Martin Luther King Jr. as part of his effort to raise awareness and bring peace in Vietnam. There was an unexpected outcome of Nhat Hanh's letter to King: The two men met in 1966 and 1967 and became not only allies in the peace movement, but friends. This friendship between two prophetic figures from different religions and cultures, from countries at war with one another, reached a great depth in a short period of time. Dr. King nominated Thich Nhat Hanh for the Nobel Peace Prize in 1967. He wrote: "Thich Nhat Hanh is a holy man, for he is humble and devout. He is a scholar of immense intellectual capacity. His ideas for peace, if applied, would build a monument to ecumenism, to world brotherhood, to humanity."

The two men bonded over a vision of the Beloved Community: a vision described recently by Congressman John Lewis as "a nation and world society at peace with itself." It was a concept each knew of because of their membership within the Fellowship of Reconciliation, an international peace organization, and that Martin Luther King Jr. had been popularizing through his work for some time. Thich Nhat Hanh, Andrus shows, took the lineage of the Beloved Community from King and carried it on after his death.

In Brothers in the Beloved Community, Marc Andrus tells the little-known story of a friendship between two giants of our time.

The Rt. Rev. Marc Handley Andrus is the eighth bishop of the Episcopal Diocese of California. Prior to his election as Bishop of California, Andrus served as Bishop Suffragan in the Episcopal Diocese of Alabama. His leadership has focused on key issues related to peace and justice, including immigration reform, civil rights for LBGTQ+ persons, health care, and climate change. His climate advocacy work has taken him to the UN Climate Conferences in Paris (COP21), Marrakesh (COP22), Bonn (COP23), and Katowice, Poland (COP24), as well as the Dakota Access Pipeline demonstrations at Standing Rock. He lives in San Francisco with his wife, Sheila.

"This book breaks new ground and in so doing is a real testament of hope. Andrus has pulled back a curtain from the pages of history and given us a glimpse into the remarkable and yet not well known friendship between Buddhist monk Thich Nhat Hanh and the Rev. Dr. Martin Luther King Jr."
—The Most Rev. Michael B. Curry, Presiding Bishop of The Episcopal Church and author of Love is the Way and The Power of Love

"An important contribution. After almost four decades of intensive research as editor of The Papers of Martin Luther King, Jr., I was surprised to learn about the depth of the friendship between King and Thich Nhat Hanh, as well as their impact on each other."
—Clayborne Carson, Founding Director, Martin Luther King Jr. Research & Education Institute

"Just when our society, riven by pandemic and party politics, has never seemed more polarized, comes a call to behold one another with the eyes of acceptance and belonging. This call gives us a redemptive purpose and a name: the Beloved Community.”
—Joanna Macy, author of World as Lover, World as Self

"A moving story of two giants separated by race, religion, culture and nationality, and yet profoundly united in their dedication to a deeply interconnected world of peace and compassion."
—Christiana Figueres, author of The Future We Choose

“I have been waiting for a book about Thich Nhat Hanh and Martin Luther King Jr. as friends and brothers since I first learned of their relationship fourteen years ago. Brothers in the Beloved Community tells their powerful story and invites us to follow in their footsteps by finding peace within and working towards a global community centered on human rights, compassion, and love.”
—Bryant Terry, James Beard award-winning author of Black Food and Editor-in-Chief of 4 Color Books

"A beautiful and wise account of two lives that gave greater life to all of us through their remarkable friendship and shared vision of nonviolence."
—Joan Halifax, author of Standing at the Edge

"Bishop Andrus invites us into the story of two special friends—lamps of our world—whose life examples make visible the great potential of what a human being can become. This book will awaken your humanity and summon the fierce love, bravery, and healing power we all innately possess."
—Elizabeth Mattis Namgyel, author of The Logic of Faith