No One's Ways: An Essay on Infinite Naming (Hardcover) 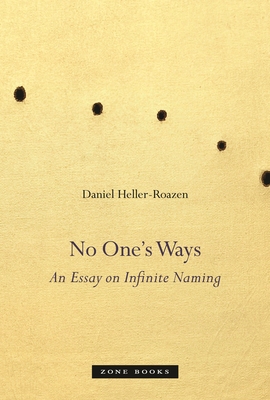 Homer recounts how, trapped inside a monster's cave, with nothing but his wits to call upon, Ulysses once saved himself by twisting his name. He called himself Outis: "No One," or "Non-One," "No Man," or "Non-Man." The ploy was a success. He blinded his barbaric host and eluded him, becoming anonymous, for a while, even as he bore a name.

Philosophers never forgot the lesson that the ancient hero taught. From Aristotle and his commentators in Greek, Arabic, Latin, and more modern languages, from the masters of the medieval schools to Kant and his many successors, thinkers have exploited the possibilities of adding "non-" to the names of man. Aristotle is the first to write of "indefinite" or "infinite" names, his example being "non-man." Kant turns to such terms in his theory of the infinite judgment, illustrated by the sentence, "The soul is non-mortal." Such statements play major roles in the philosophies of Maimon, Fichte, Schelling, Hegel, and Hermann Cohen. They are profoundly reinterpreted in the twentieth century by thinkers as diverse as Carnap and Heidegger.

Reconstructing the adventures of a particle in philosophy, Daniel Heller-Roazen seeks to show how a grammatical possibility can be an incitement for thought. Yet he also draws a lesson from persistent examples. The philosophers' infinite names all point to one subject: us. "Non-man" or "soul," "Spirit" or "the unconditioned," we are beings who name and name ourselves, bearing witness to the fact that we are, in every sense, unnamable.