Lost in Nyc: A Subway Adventure: A Toon Graphic (Hardcover) 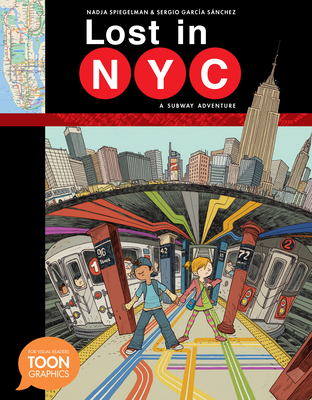 The sights . . . the sounds . . . the SMELLS New York's crowded subway system is known for many things, but being easy on a lost kid isn't one of them. When Pablo gets separated from his new schoolmates during his first field trip in New York City, he doesn't know how he'll be able to find them again. Luckily, he has a little knowledge, a new friend, and the surprisingly approachable city itself to guide his way. This story features maps, archival photos, and fascinating facts to help readers explore the subway without ever having to get caught like Pablo in the mob of Times Square. It brings all the bustle and beauty of NYC to young readers around the world.

Nadja Spiegelman is the Eisner-nominated author of the Zig & Wikki series of science comics for young children. A native New Yorker, she prides herself on important subway know-how such as where to stand to get a seat and how to sleep without missing her stop. She now spends her time between Paris and Brooklyn.Sergio Garcia Sanchez is one of Spain's most celebrated experimental cartoonists. He has published more than forty-five books and his work has been translated into nine languages. He is also a professor of comics in France and Spain and currently lives in Granada with his wife and his children.