The Society of the Spectacle (Critical Editions) (Paperback) 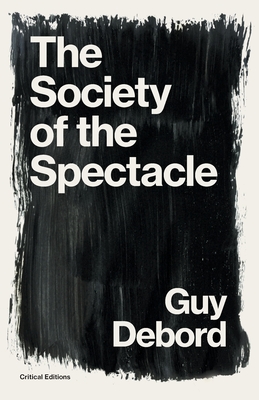 'The Debordian analysis of modern life resonates more deeply and darkly than perhaps even its creator thought possible...' - The New Yorker

'Guy Debord is a time bomb, and a difficult one to defuse.' - Michael L wy

First published in 1967, Guy Debord's stinging revolutionary critique of contemporary society, The Society of the Spectacle has since acquired a cult status. The Das Kapital of the 20th century. An essential text, and the main theoretical work of the Situationists. Few works of political and cultural theory have been as enduringly provocative. From its publication amid the social upheavals of the 1960's up to the present, the volatile theses of this book have decisively transformed debates on the shape of modernity, capitalism, and everyday life.

'In Society of the Spectacle, Debord sets out his best-known statement of how the categories of capitalism colonise everyday life to such an extent that we can barely imagine an existence beyond them.' - Sydney Review of Books

'The Society of the Spectacle is] about not just the clamor of images but also the silence of power, a silence which, since the seventies, has become deafening.' - McKenzie Wark

'Never before has Debord's work seemed quite as relevant as it does now, in the permanent present that he so accurately foretold? Open his book, read it, be amazed, pour yourself a glass of supermarket wine - as he would wish - and then forget all about it, which is what the Spectacle wants.' - Will Self

'In The Society of the Spectacle, Debord made plain that a 'unified critique of culture' implied a critique of the social totality. This was his practico-theoretical method throughout his career as a revolutionary: he saw no distinction between cultural work and political work.' - Bruce Russell

'I read The Society of the Spectacle] again and I thought, "This is a fucking amazing book " I had forgotten how terrific it was, and it was actually quite different to how I remembered it. I insist that the key chapter is not the first one, on the spectacle itself, but the second to last - the chapter on d tournement. To me, that concept is the great gift of the Situationists. They] realized that one can exploit this critically - one can copy and correct in the direction of hope.' - Los Angeles Review of Books

Guy Debord (1931-1994) was a Marxist theorist, writer, poet, filmmaker, hypergraphist, cultural revolutionary and a founding member of the Lettrist International and Situationist International - groups that fused avant-garde art and politics as an anti-capitalist weapon. Few works of political and cultural theory have been as enduringly provocative as Debord's Society of the Spectacle, which decisively transformed debates on the shape of modernity, capitalism and contemporary life.