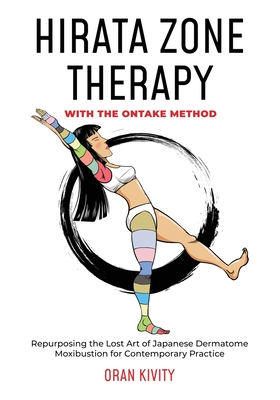 Hirata was a medical student by day-and a rebel by night. Critical of Western medicine, he pioneered a holographic system of dermatome stimulation using a heated probe-designed to trigger the body's self-healing mechanisms and empower laypeople to treat themselves.

Hirata's first book in 1933 was a runaway bestseller. In the West, however, the tools used in Japan to heat the skin were not available, and his system is not well known. Now, nearly one hundred years later-Hirata Zone Therapy has found new life with the integration of Ontake Warm Bamboo, a simple-to-apply moxibustion tool.

Oran Kivity's first book was Moxa in Motion with the Ontake Method. For this second book on rhythmic moxibustion, he has researched the Hirata Zones extensively, decoding the approaches not only of Hirata, but his more famous exponent, Dr Manaka. Simply written and clearly illustrated, this is the first systematic exploration in English of these ideas, repurposing them for contemporary practice.

In this book, you will learn:

- How to load, light, and apply bamboo safely

- The twelve Hirata zones and their mappings

- Basic, intermediate, and complex strategies for treating over 200 diseases

Hirata Zone Therapy will significantly expand your reach as a practitioner, adding new understanding and extra momentum to your treatments, whatever your style of practice.

Oran Kivity is a veteran acupuncturist and international trainer from the UK. He has dedicated countless hours of clinical observation and study to integrate the knowledge of contemporary Japanese masters. Through writing and teaching, he has ignited interest in Ontake, a remarkable moxa tool from Japan, researching and developing these dynamic techniques and compiling them into this practical handbook of clinical moxibustion.