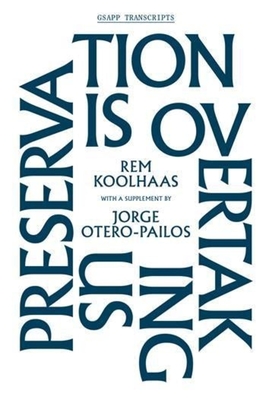 Preservation is Overtaking Us brings together two lectures given by Rem Koolhaas at Columbia University's Graduate School of Architecture, Planning and Preservation, along with a response (framed as a supplement to the original lectures) by Jorge Otero-Pailos. In the first essay Koolhaas describes alternative strategies for preserving Beijing, China. The second talk marks the inaugural Paul Spencer Byard lecture, named in celebration of the longtime professor of Historic Preservation at GSAPP. These two lectures trace key moments of Koolhaas' thinking on preservation, including his practice's entry into China and the commission to redevelop the State Hermitage Museum in St. Petersburg, Russia. In a format well known to Koolhaas' readers, Otero-Pailos reworks the lectures into a working manifesto, using it to interrogate OMA's work from within the discipline of preservation.

Rem Koolhaas is an architect and theorist, and founded the Office of Metropolitan Architecture (OMA) in 1975. Winner of the Pritzker Prize in 2000, Koolhaas is the author of the seminal Delirious New York (1978) and S, M, L, XL (1995) among numerous other books, and his buildings include some of the most iconic structures of the early twenty-first century. Jorge Otero-Pailos is an architect, artist, theorist, and Associate Professor of Historic Preservation at Columbia GSAPP. He is the author of Architecture's Historical Turn: Phenomenology and the Rise of the Postmodern and the founder and editor of the journal Future Anterior.