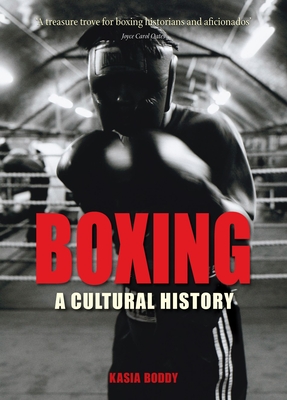 By Kasia Boddy
Email or call for price
Out of Print

Boxing is one of the oldest and most exciting of sports: its bruising and bloody confrontations have permeated Western culture since 3000 BC. During that period, there has hardly been a time in which young men, and sometimes women, did not raise their gloved or naked fists to one other. Throughout this history, potters, sculptors, painters, poets, novelists, cartoonists, song-writers, photographers and film-makers have been there to record and make sense of it all.In her encyclopaedic investigation, Kasia Boddysheds new lighton an elemental sports and struggle for dominance whose weapons are nothing more than fists. Boddy examines the shifting social, political and cultural resonances of this most visceral of sports, and shows how from Daniel Mendoza to Mike Tyson, boxers have embodied and enacted our anxieties about race, ethnicity, gender and sexuality. Looking afresh at everything from neoclassical sculpture to hip-hop lyrics, Boxing explores the way in which the history of boxing has intersected with the history of mass media, from cinema to radio to pay-per-view. The book alsooffersan intriguing new perspective onthe work of such diverse figures as Henry Fielding, Spike Lee, Charlie Chaplin, Philip Roth, James Joyce, Mae West, Bertolt Brecht, and Charles Dickens.An all-encompassing study, Boxingultimately reveals to us just how and why boxing has mattered so much to so many.

Kasia Boddy is a lecturer in the Department of English at University College London and has contributed to American Bodies: Cultural Histories of the Physique and Voyages and Visions.