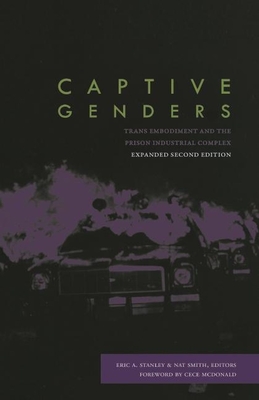 Pathologized, terrorized, and confined, trans/gender non-conforming and queer folks have always struggled against the prison industrial complex. Eric A. Stanley and Nat Smith bring together current and former prisoners, activists, and academics for a new understanding of how race, gender, ability, and sexuality are lived under the crushing weight of captivity. Through a politic of gender self-determination, this collection argues that trans/ queer liberation and prison abolition must be grown together. From rioting against police violence and critiquing hate crimes legislation, to prisoners demanding access to HIV medications, and far beyond, Captive Genders is a challenge for us all to join the struggle. This expanded second edition includes a new foreword from CeCe McDonald and essays by Chelsea Manning, Kalaniopua Young, and Janetta Louise Johnson and Toshio Meronek.

Captive Genders is an exciting assemblage of writings--analyses, manifestos, stories, interviews--that traverse the complicated entanglements of surveillance, policing, imprisonment, and the production of gender normativity. Focusing discerningly on the encounter of transpersons with the apparatuses that constitute the prison industrial complex, the contributors to this volume create new frameworks and new vocabularies that surely will have a transformative impact on the theories and practices of twenty-first century abolition. --Angela Y. Davis, professor emerita, University of California, Santa Cruz The contributors to Captive Genders brilliantly shatter the assumption that the antidote to danger is human sacrifice. In other words, for these thinkers: where life is precious life is precious. --Ruth Wilson Gilmore, author of Golden Gulag: Prisons, Surplus, Crisis, and Opposition in Globalizing California Captive Genders is at once a scathing and necessary analysis of the prison industrial complex and a history of queer resistance to state tyranny. By analyzing the root causes of anti-queer and anti-trans violence, this book exposes the brutality of state control over queer/trans bodies inside and outside prison walls, and proposes an analytical framework for undoing not just the prison system, but its mechanisms of surveillance, dehumanization and containment. --Mattilda Bernstein Sycamore, author of Why Are Faggots So Afraid of Faggots?

Eric Stanley is a postdoctoral fellow at UCSD. His writings appear in Social Text, American Quarterly, and Women and Performance, as well as various collections.

Nat Smith works with Critical Resistance and the Trans/Variant and Intersex Justice Project.

CeCe McDonald was unjustly incarcerated after fatally stabbing a transphobic attacker in 2011. She was released in 2014 after serving nineteen months for second-degree manslaughter.

Eric A. Stanley: Eric A. Stanley is a radical queer activist, outlaw academic, experimental filmmaker.Nat Smith: Nat Smith is a member of Trans/gender Variant in Prison Committee and an organizer with Critical Resistance.CeCeMcDonald: CeCe McDonald was unjustly incarcerated after fatally stabbing a transphobic attacker in 2011. She was released in 2014 after serving nineteen months for second-degree manslaughter.