From Modernity to Modernism: (towards a Metaphilosophy of Daily Life) (Critique of Everyday Life (Verso) #3) (Paperback) 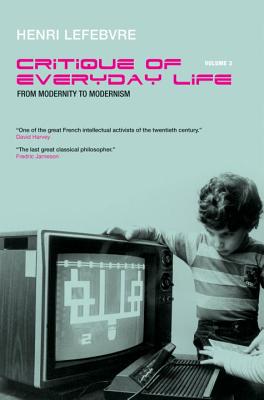 This is book number 3 in the Critique of Everyday Life (Verso) series.

Henri Lefebvre's magnum opus: a monumental exploration of contemporary society.
Henri Lefebvre's three-volume "Critique of Everyday Life" is perhaps the richest, most prescient work by one of the twentieth century's greatest philosophers. Written at the birth of post-war consumerism, the "Critique" was a philosophical inspiration for the 1968 student revolution in France and is considered to be the founding text of all that we know as cultural studies, as well as a major influence on the fields of contemporary philosophy, geography, sociology, architecture, political theory and urbanism. A work of enormous range and subtlety, Lefebvre takes as his starting-point and guide the "trivial" details of quotidian experience: an experience colonized by the commodity, shadowed by inauthenticity, yet one which remains the only source of resistance and change.
This is an enduringly radical text, untimely today only in its intransigence and optimism.

Henri Lefebvre (1901-1991), former resistance fighter and professor of sociology at Strasbourg and Nanterre, was a member of the French Communist Party from 1928 until his expulsion in 1957. He was the author of sixty books on philosophy, sociology, politics, architecture and urbanism.

Gregory Elliott is a member of the editorial collective of Radical Philosophy and author of "Althusser: The Detour of Theory" and "Labourism and the English Genius: The Strange Decay of Labour England?."

“One of the great French intellectual activists of the twentieth century.”—David Harvey