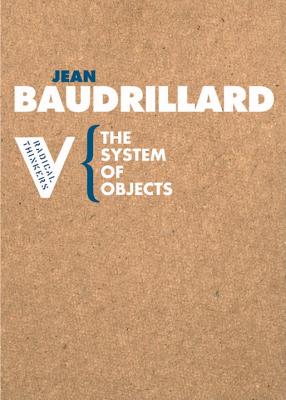 The System of Objects is a tour de force—a theoretical letter-in-a-bottle tossed into the ocean in 1968, which brilliantly communicates to us all the live ideas of the day.

Pressing Freudian and Saussurean categories into the service of a basically Marxist perspective, The System of Objects offers a cultural critique of the commodity in consumer society. Baudrillard classifies the everyday objects of the &ldquo;new technical order&rdquo; as functional, nonfunctional and metafunctional. He contrasts &ldquo;modern&rdquo; and &ldquo;traditional&rdquo; functional objects, subjecting home furnishing and interior design to a celebrated semiological analysis. His treatment of nonfunctional or &ldquo;marginal&rdquo; objects focuses on antiques and the psychology of collecting, while the metafunctional category extends to the useless, the aberrant and even the &ldquo;schizofunctional.&rdquo; Finally, Baudrillard deals at length with the implications of credit and advertising for the commodification of everyday life.

The System of Objects is a tour de force of the materialist semiotics of the early Baudrillard, who emerges in retrospect as something of a lightning rod for all the live ideas of the day: Bataille&rsquo;s political economy of &ldquo;expenditure&rdquo; and Mauss&rsquo;s theory of the gift; Reisman&rsquo;s lonely crowd and the &ldquo;technological society&rdquo; of Jacques Ellul; the structuralism of Roland Barthes in The System of Fashion; Henri Lefebvre&rsquo;s work on the social construction of space; and last, but not least, Guy Debord&rsquo;s situationist critique of the spectacle.

Jean Baudrillard (1929–2007) began teaching sociology at the Université de Paris-X in 1966. He retired from academia in 1987 to write books and travel until his death in 2007. His many works include Simulations and Simulacra, America, The Perfect Crime, The System of Objects, Passwords, The Transparency of Evil, The Spirit of Terrorism, and Fragments, among others.

&ldquo;The most notorious intellectual celebrity to emerge from Paris since Roland Barthes and the most influential prophet of the media since Marshall McLuhan.&rdquo;—i-D magazine