The Novels of Frances Hodgson Burnett: In the World of Actual Literature (Anthem Nineteenth-Century) (Paperback) 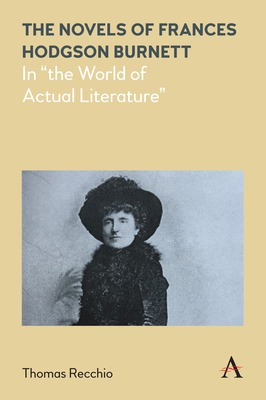 Frances Hodgson Burnett is remembered today as the author of the children's classic "The Secret Garden," but in her lifetime she had a long and successful career as a novelist, dramatist, and writer of children's stories. Born in 1849 in Manchester, England, Burnett settled in Tennessee with her mother and siblings at sixteen after her father's death. She began writing stories to supplement her family's income. With the acceptance of the story "Surly Tim's Trouble" by "Scribner's Magazine" in New York and the subsequent publication of her first novel "That Lass O'Lowries" in 1877, the critics hailed Burnett as a new voice in American fiction comparing her favorably to Charles Dickens.

Burnett's early novels were written in the years prior to and immediately after the death of George Eliot in 1880, their form very much in the Victorian tradition of realism. Her first two novels were social problem novels set in a mining and manufacturing district in Lancashire and they deployed the local dialect to great effect. Even in those early traditional novels, the contours of Burnett's unique conception of her later female characters can be discerned. After her industrial novels, she published a short American regional novel about rural life in North Carolina and an English village novel modelled on Elizabeth Gaskell's "Cranford" with this difference: Burnett's heroine in that tale is a young, vibrant American woman. With the publication of her Washington novel "Through One Administration," which critics compared to Henry James's "The Portrait of a Lady" as fine examples of the "new fiction," Burnett's career as a novelist was firmly established. Thus, the early chapters of this book read Burnett's novels alongside those of Elizabeth Gaskell and Henry James as a way to demonstrate her place is the changing literary field of the time.

After her Washington novel, she turned away from realism and the psychological minuteness of the new fiction to experiment with both traditional and popular novel forms. She next published two historical novels "A Lady of Quality" and "His Grace of Osmonde," the first a tale of her most challenging heroine Clorinda Wildairs and the second a tale of the man Clorinda ultimately marries. Taken together the two novels tell the same tale from a woman's and a man's point of view. "The Novels of Frances Hodgson Burnett" places those novels in the context of theories of the Victorian historical novel and in relation with Victorian narrative deployment of multiple points of view.

She next published a pair of transatlantic novels roughly modelled on a pattern she sketched out in her children's classic, "Little Lord Fauntleroy." The novels engage with issues related to the "new woman" novel of the period, especially in relation to fears of cultural degeneration and the responsibility of women to redress those fears. Her last two novels appeared after the Great War in which she wrestled with the crisis of meaning for Anglo-American culture in the wake of the war. The final chapter of this book, then, places those last novels in relation to Great War novels written by women and frames a reading of Burnett's engagement with the Great War through T. S. Eliot's "The Wasteland." Read as a body of literary fiction, Burnett's novels constitute an important thread that chronicles the changing contexts and forms of English and American fiction from the end of the Victorian period to the Jazz Age of the 1920s.