Paris in Turmoil: A City between Past and Future (Hardcover) 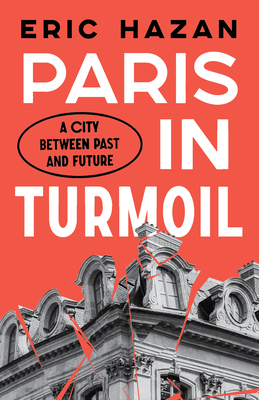 A kaleidoscopic look at Paris’s ever-changing forms and people

"Since the disastrous Pompidou years, working-class Paris has been steadily nibbled away, either by destruction  or more insidiously by a kind of internal colonization.

Take for example a small outlying district populated by Arabs, blacks and poor whites twenty years ago, the L’Olive neighbourhood north of La Chapelle The area is noted as pleasant, people frequent it and explore it, and as the rents are low some settle there. Others follow, first friends and then anyone else. Rents go up, buildings are renovated, bars open, then an organic food shop, a vegan restaurant... The earlier indigenous inhabitants are driven out by the rising rents and settle further away, in Saint-Denis if they are lucky, or else in Garges-lès-Gonesse, Goussainville or God knows where.

"But new neighbourhoods are emerging, for example the Chinese quarter of Bas Belleville, which has grown since the 1970s to the point that in some streets, such as Rue Civiale or Rue Rampal, the restaurants and shops are all Chinese, with many Chinese sex workers on Boulevard de la Villette. These Chinese almost all come from Wenzhou, a large province south of Shanghai, whose inhabitants are reputedly known for their commercial skills."

Paris is constantly changing as a living organism, both for better and for worse. This book is an incitement to open our eyes and lend an ear to the tumult of this incomparable capital, from the Périphérique to Place Vendôme, its markets of Aligre and Belleville, its cafés and tabacs, its history from Balzac to Sartre.

In some thirty succinct vignettes, from bookshops to beggars, Art Nouveau to street sounds, Parisian writers to urban warts, Jacobins to Surrealism, Hazan offers a host of invaluable aperçus, illuminated by a matchless knowledge of his native city.

Eric Hazan has been a surgeon and political activist, as well as the founder of pioneering French publisher La Fabrique. His previous books include The Invention of Paris, A Walk Through Paris, and A History of the Barricade.

“A jewel of a book. A must read for any aspirant Parisian flâneur or intellectually curious visitor to the city. Hazan reminds us that Paris is so much more than its wide boulevards and antiseptic tourist spots. He invites us to consider its multi-layered, multi-linguistic, multicultural, amorphous past and present. Paris in Turmoil is the perfect aperitif to the city and will enrich any visit. Better still, it can be read in one sitting on the Eurostar on your way there.”
—Edward Chisholm, author of A Waiter in Paris: Adbentures in the Dark Heart of the City

“Hazan, a political activist and insatiable flâneur (‘stroller,’ roughly), has compiled something far greater than musings on the City of Light. Read together, these pieces offer an extended invitation to the reader to take the many layers of Parisian life and history more seriously and give them the attention they merit … [Readers] will find this fiery and charming volume the perfect companion for a thought-provoking walk around the City of Light.”
—Library Journal

“Hazan meshes history, architecture, philosophy, and social geography in this concise yet wide-ranging tribute to his native Paris. Throughout, Hazan expertly reflects on the city’s cultural and intellectual transformations, and spotlights writers who “left their mark on the city,” including Victor Hugo and Honoré de Balzac. The result is an astute and opinionated tour of one of the world’s great cities.”
—Publishers Weekly