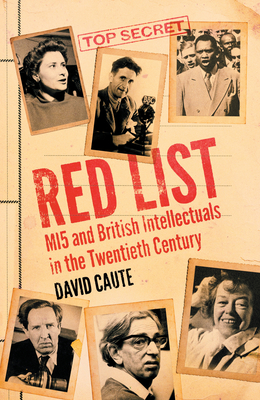 A gripping history of the Security Service and its covert surveillance on British writers and intellectuals in the twentieth century.

In the popular imagination MI5, or the Security Service, is know chiefly as the branch of the British state responsible for chasing down those who pose a threat to the country's national security--from Nazi fifth columnists during the Second World War, to Soviet spies during the Cold War and today's domestic extremists. Yet, aided by the release of official documents to the National Archives, David Caute argues in this radical and revelatory history of the Security Service in the twentieth century, suspicion often fell on those who posed no threat to national security. Instead, this 'other history' of MI5, ignored in official accounts, was often as not fuelled by the political prejudices of MI5's personnel, and involved a huge programme of surveillance against anyone who dared question the status quo.

Caute, a prominent historian and expert on the history of the Cold War, tells the story of the massive state operation to track the activities of a range of journalists, academics, scientists, filmmakers, writers and others who, during the twentieth century, the Security Service perceived as a threat to the national interest. Those who were tracked include such prominent figures as Kingsley Amis, George Orwell, Doris Lessing, John Berger, Benjamin Britten, Eric Hobsbawm, Michael Foot, Harriet Harman, and others.

David Caute, a quondam Fellow of All Souls College, Oxford, is a Fellow of the Royal Society of Literature and the Royal Historical Society. His recent books include Isaac and Isaiah: The Covert Punishment of a Cold War Heretic; Politics and the Novel During the Cold War; and The Dancer Defects.

“Caute has pieced together an extensive history of MI5 surveillance across the twentieth century … Red List demonstrates that the function of the security state is to foreclose political possibilities before they pose any direct threat to the established order, often ruining countless lives in the process.”
—Jacobin

“Red List reintroduces us to lost generations of artists and writers, many of whom opposed imperial wars and British colonialism in India but disappeared into the annals of history—perhaps due to MI5 influence … [Caute] exemplifies how capitalist superpowers can control their own history and the legacy of radical art.”
—Billy Anania, Hyperallergic

“An exceptional and seminal work of impeccable scholarship and exhaustive research.”
—The Midwest Book Review