Slave Songs of the United States: 136 Songs Complete with Sheet Music and Notes on Slavery and African-American History (Paperback) 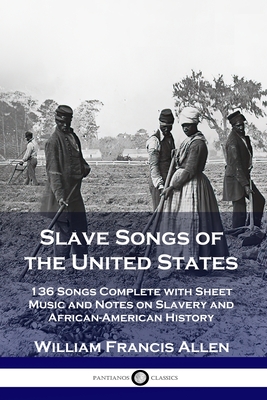 136 songs of African-American slaves, collected and compiled a few years after the Emancipation Proclamation, are presented here complete with their musical notation in this superb edition.

In the introduction, the chief compiler of this music, William Francis Allen, expresses his admiration for the musical talents of black Americans. He mentions that even prior to the end of slavery, public appreciation existed. Yet Allen realized that much of this music, emblematic of the hardships and life of black slaves, was in danger of being forgotten in time. He and his assistants found and interviewed former slaves who would sing their tunes. In this way, a total of 136 songs, their notes, verse and chorus lyrics, were successfully put to paper.

The author observes how much of the music is religious, with allusions to the Bible, Jesus and Lord frequent. Yet narratives of slave life, and the emotions of the singers, also feature strongly. Many of the songs were sung repeatedly as the slaves worked the fields, their choruses and melodies being intended to enliven a day of hard labor in the heat of the sun. The music in this collection is divided by region; differences in vocalizing and phrases can be observed, reflecting the various localities in which slaves were raised and labored in.