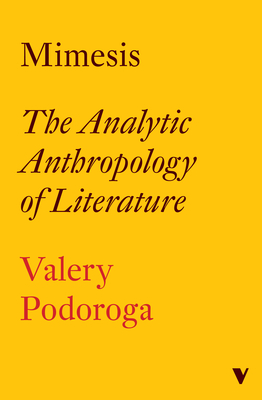 Ground-breaking work of philosophy and Russian Literature: translated for the first time

Valery Podoroga was one of the most important thinkers of his generation. Here his most famous work is translated into English for the first time. In it he gives a panorama view of Russian writing, focusing in on the work of Nikolai Gogol, Fyodor Dostoevsky and Andrei Bely. He identifies these authors as pioneers in creating an 'other literature'. This constituted a new form of mimesis or vision of the world, in opposition to the Imperial and national myths.

In Mimesis Podoroga develops and elaborates his analytic anthropological approach on these authors with startling effect, excavating the identities and forms of Russian literature, and society. He places an emphasis on how a literary work is a process of world building: both internally by creating a fictive world, but also how it reflects the wider world in which it was produced, and the power with which it changes the world.

Finally, the literary work’s ability to exist in a time that is other than its own time, a time where it does not have a contemporary reader and an author who exercises his will, but where it nonetheless continues to mean something.

Mimesis is rightly seen as the masterwork of one of the world's leading literary thinkers.

Valery Podoroga was born in Moscow in 1946 and was a leading figure at the Institute of Philosophy of the Russian Academy of Science until his death in 2020. With a particular focus on 19th century Russian literature he developed his thesis of Analytic Anthropology. The author of over 200 articles and ten monographs, he was award the prestigious Andrei Bely Prize for literature in 2001.