Bitcoin: The future of money? (Paperback) 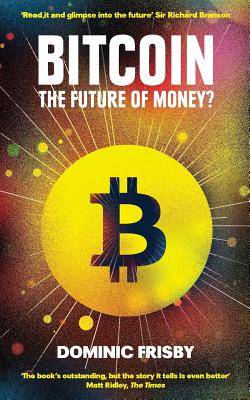 'Bitcoin is one of the most important innovations of our time - it will transform the way we do business. Dominic Frisby has written a great account. Read it and glimpse into the future' -Sir Richard Branson In 2008, while the world was busy panicking about the global financial crisis, a computer programmer called Satoshi Nakamoto posted a message on an out-of-the-way mailing list. 'I've been working on a new electronic cash system, ' he said. 'It might make sense to get some just in case it catches on.' Nobody seemed to care. But what he had programmed would become the world's most famous alternative currency: Bitcoin. Economists, anarchists, speculators, computer coders, libertarians, criminals and entrepreneurs were inspired across the world. Early adopters would make a return two million times larger than their investment. Now it seems that Bitcoin will do to banking and finance what email did to the postal service and what the internet did to publishing: destroy old monopolies and create opportunities for the masses. Some even suggest that the technology behind Bitcoin will usurp our Western systems of representative democracy. In this gripping book, Dominic Frisby sets out to solve the mystery surrounding the identity of Bitcoin's secretive creator, Satoshi Nakamoto. He shows how Bitcoin will change the world. And, perhaps most importantly of all, he does something nobody else has hitherto been able to do: he explains in layman's language exactly how it works. 'The book's outstanding, but the story it tells is even better.' -Matt Ridley, The Times 'In this highly readable yet technically accomplished book, Dominic Frisby makes crypto currencies crystal clear. Read it, or fail to understand possibly the most important financial innovation of our time.' -Liam Halligan, Sunday Telegraph 'Despite having an MSc in Computer Science and spending over ten years studying monetary theory, I ignored Bitcoin as hype for too long. You shouldn't. Read Dominic's thrilling book and discover the next big thing.' -Steve Baker, MP.

Dominic Frisby is a comedian from London. But his first book, Life After The State, has nothing to do with comedy. It is a deadly serious dismantling of the way societies are run in the west, outlining the damage governments unknowingly do to their people, with simple suggestions about how things can be vastly improved. Dominic writes an investment column for MoneyWeek and has written and produced numerous short films and videos, including the viral hit 'Debt Bomb'. His script-writing ranges from episodes of the kids' show 'Roary the Racing Car' to the feature documentary 'The Four Horsemen', about the global financial crisis. He is a frequent speaker on gold and money on television, radio and at conferences. Frisby is also a comedian and actor, described as 'viciously funny and inventive' by the Guardian; 'masterful' by the Evening Standard; and 'great comedy talent' by Chortle.co.uk. Day-to-day he is found trotting about the sound studios of London, voicing everything from BBC nature documentaries to zombies in Hollywood blockbusters. He has also worked as a TV presenter, a boxing-ring announcer, a florist, a removal man, an extremely camp theatrical agent's PA, a sports commentator and a busker.