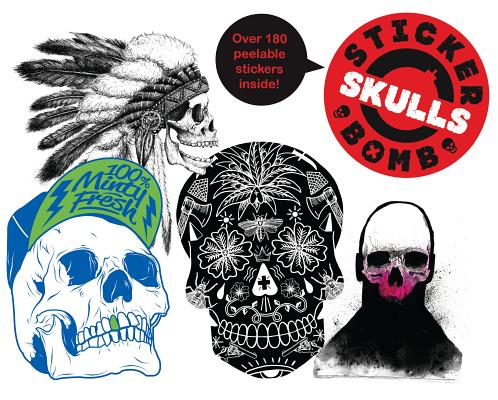 Stickerbomb Skulls is the latest themed book in the Stickerbomb series, featuring many forms of design and illustrations of skulls by an eclectic mix of artists from around the world. Skulls are a very strong visual icon used extensively in the worlds of fashion, jewelry, graphic design, music, street art, and tattoos. The book will appeal to existing Stickerbomb fans as well as new fans who love skull imagery.

The SRK (Studio Rarekwai) is a creative studio based in London and Jakarta. Initiated by a director and producer partnership in 2006 with a focus on documentary films, the SRK grew in size to house a troupe of creatives whose skills encompass filmmaking, sound design, animation, illustration, publishing, and events. The SRK has worked with Polydor Records, ARTE TV, the BBC, Channel4, Film4, MTV, SONAR, Spaceshower TV, and a number of international non-governmental organisations. Their books include RackGaki, Graffiti Asia, and the Stickerbomb series (all Laurence King).