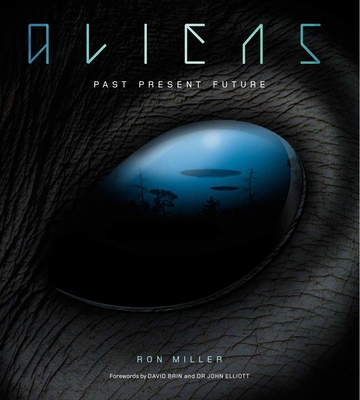 Aliens: Past, Present, Future is the first coloured, illustrated book to comprehensively chart humankind’s fascination with the concept of existence of life beyond Earth – from both the perspective of scientists and in popular culture.
Aliens: Past, Present, Future covers the subject of extraterrestrial life from every angle, from the earliest speculations more than 400 years ago to today’s ongoing search for Earth 2.0. In between are lessons learned about how life originated on our own planet, as well as the story behind the vast cult that has grown up around “flying saucers” and strange visitors from other planets, including popular culture renditions of them.
The book is organised into three parts. Part 1 reviews humankind’s changing thinking about possible worlds other than our own through history. Part 2 discusses the science of extraterrestrial life in a way that every reader – non-scientist and scientist alike – will understand. And Part 3 explores the deep impact the idea of extraterrestrial beings has had – not only on science and space exploration but on popular culture as well – and its potential impact on philosophy and religion. The very concept of extraterrestrial life has been a driving force behind our exploration of the universe and a pervasive presence in movies, books, comics and advertising throughout the past century.
Written by bestselling author Ron Miller, the book features more than 200 illustrations – from centuries-old engravings, book, comic and magazine art, movie posters, purported UFO photographs, to colour illustrations showing what today’s cutting-edge scientists think extraterrestrial life could be like. Could there even be aliens among us already?

Ron Miller is an award-winning US illustrator and the bestselling author of more than 50 books, including the Hugo-nominated The Grand Tour (over 250,000 copies sold), Cycles of Fire, In the Stream of Stars, The Art of Space and The History of Earth. He is also an editor for Air & Space/Smithsonian magazine and a member of the International Academy of Astronautics.

David Brin is an American scientist, New York Times bestselling author and tech-futurist whose novels include Earth, The Postman and Hugo Award-winners Startide Rising and The Uplift War.

Dr John Elliott is an expert in the field of xenolinguistics (the study of the hypothetical language of alien species) and co-founder of the UK SETI Research Network (UKSRN), which promotes research in the UK into the Search for Life on other Worlds.

"This is a cleanly designed book, full of fascinating images ranging from centuries old engravings to movie posters and photos of alleged 'flying saucers'. Yet the greatest clarity is found in Miller's writing. Clearly and succinctly, he explains the history of astronomy and the science of exobiology in ways suitable for non-scientists, while his exploration of the cultural consequences arising from our evolving concept of aliens - including the myths that have arisen over time about them already being on Earth or the Moon - is firm and well-argued. 5 of 5 Stars."

“In a new lush hardback, Ron Miller charts our fascination with alien lifeforms and how we perceive them.”

If you're interested in the subject of extra terrestrial life, this book gives you a pretty comprehensive look at the realities of aliens in the universe, which should whet your appetite for more serious reading.