Calm Before The Storm (Paperback) 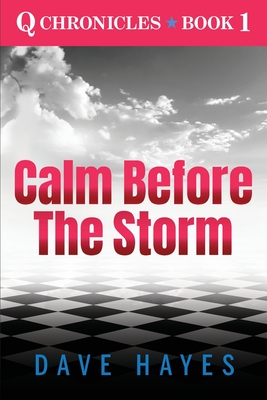 Are we living under a two-tiered system of justice?
Why do the wealthy and powerful escape prosecution for their crimes?
Why is there so much pain and suffering in the world?
Is anything being done about it?

Using a combination of wit, wisdom, and gravity, an unknown intelligence insider--identified simply as "Q"--has been communicating with anonymous citizens (anons) through internet message forums since 2017. These online exchanges bear no resemblance to your typical social media conversations; there are sobering missions at stake. Q says corruption is worse than we know. It has invaded the corporate world, the media, academia, Hollywood, the church, and other parts of society. It is the cause of war, poverty, and countless problems that rob us of our potential.

In this first book of the Q Chronicles series, Dave Hayes takes readers back to the intriguing first weeks of Q's mission. He explains how to understand the language of Q. He shows how Q--by asking questions using the Socratic method--prompts in-depth research of little-noticed reports, government documents, air flights, maps, media stories, and current events.

With Q's help, anons were forewarned about how Jeffrey Epstein really made his money. They got inside information about President Trump's meetings with Kim Jong-un, clues to follow regarding the controversial Iran deal, and hints that the NXVIM "self-help" organization was not as advertised. It's no wonder Q has fascinated millions.

The research segment of Q's mission is meant to bring about the "Great Awakening"-- a coming era when we will unplug from the media programming machine that has been indoctrinating the world. We will learn the truth, and there will be proof to confirm our nagging suspicions. As you can imagine, there are opposing forces that would love to stop Q from revealing anything more, but Q always seems to be a few steps ahead of them.

A storm is approaching that will sweep criminal power brokers into the dustbin of history. The system that enables corruption is being dismantled and replaced. So get your popcorn ready. The show is about to begin, and you have a front-row seat.