Zelensky: The Unlikely Ukrainian Hero Who Defied Putin and United the World (Paperback) 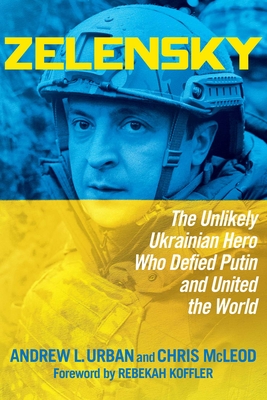 Ukraine's most popular comedic actor was an unlikely president of his country. And now, even more improbably, Volodymyr Zelensky has become the world's most celebrated statesman. Who is he? How did he become the international hero of our time?

Zelensky: The Unlikely Ukrainian Hero Who Defied Putin and United the World is a compelling account of this fascinating, enigmatic leader. Covering Zelensky's childhood, family history, and astonishing transformation from TV celebrity to first Jewish president of Ukraine, this book tells you what you need to know about the newest star of the world stage.

No one has been more surprised by Zelensky's power to inspire and mobilize his countrymen and the world than Vladimir Putin, who expected Russia's conquest of its beleaguered neighbor to be the work of an afternoon. Outfoxed and isolated, Putin is not the first person to have underestimated the former comedian with a spine of steel.

ANDREW L. URBAN, an award-winning author, journalist, and documentary filmmaker, fled Hungary as a child during the 1956 revolution, eventually settling in Australia. He has written and edited for the national daily newspaper The Australian and has authored investigative books on victims of crime.

CHRIS MCLEOD is an author, editor, and journalist who has written and edited books and bookazines on Great Trains of the World, Great Golf Course of the World, and Unsolved Murder Mysteries sold in more than 50 countries. He recently coauthored Barty, the biography of the #1 ranked world women's tennis star Ash Barty. Chris has family in Ukraine.

REBEKAH KOFFLER is a Russian-born U.S. intelligence expert who served as a Russian Doctrine & Strategy specialist in the Defense Intelligence Agency. Working with the DIA and the CIA's National Clandestine Service, she has led "red" teams during war-games and advised senior Pentagon officials. She has delivered classified briefings to top U.S. military commanders, NATO ministers, the directors of the CIA and DIA, the White House National Security Council, and senior congressional staff. In her post-public service career, Rebekah is a writer and national security commentator whose work has been published on the Fox News website, the Wall Street Journal, Newsweek, The Hill, the New York Post, Real Clear Politics, Real Clear Defense, the Daily Caller, and the Washington Times. She has appeared on Fox News, Fox Business, Fox Nation, and the Sean Hannity nationally syndicated radio show.

Born and raised in the Soviet Union, Rebekah came to America as a young woman. After 9/11, she joined the Defense Intelligence Agency, devoting her career to protecting her new country. Now she reveals in chilling detail Putin’s long-range plan— his “playbook”—to weaken and subdue the United States, preparing for the war that he believes is inevitable.