When China Attacks: A Warning to America (Hardcover) 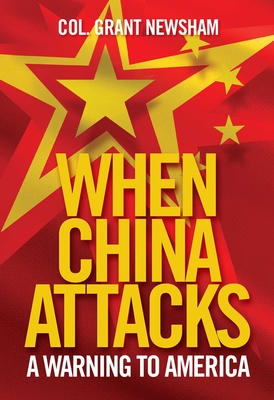 A warning about America’s impending war with China. The conflict is coming, a former Marine intelligence officer shows, and we’re not ready. But it’s not too late to prepare.

Communist China is ambitious. It wants to replace the United States as the world’s leading superpower. And it is well on its way. It is dominant in the world economy. It is a master at intellectual property theft. It shows strategic genius at cornering essential markets. It has been staggeringly successful in buying influence among American elites. And its military buildup is astonishing.

So far, China has been waging a cold war on the United States and its Asian allies. But, emboldened by American weakness and decline, that cold war is about to turn hot. The flashpoint will be Taiwan—but the war will extend over the entire Pacific Theatre. The results could be devastating.

America is facing the possibility of humiliating regional retreat—one with almost unimaginable costs to our economy and security. That’s the warning of Grant Newsham, a longtime China analyst for the Marine Corps, the Foreign Service, and Morgan Stanley Bank in Japan. His shocking new book When China Attacks is a fire bell in the night—a warning about an imminent hot war that we are already in the process of losing. It offers a frightening, but well-founded, blow-by-blow account of what might happen.

Is American defeat inevitable?  No, but only if America’s leaders heed the sobering message of When China Attacks.

Grant Newsham is a retired U.S. Marine Colonel, former intelligence officer and Marine attaché to the U.S. Embassy in Tokyo, an international trade attorney, a former foreign service officer, and a former Asia-based business executive with Morgan Stanley Bank and Motorola. A senior fellow with the Center for Security Policy and a research fellow at the Japan Forum for Strategic Studies, he writes often on Asian and American military, political, and economic matters. He lives in Hawaii.