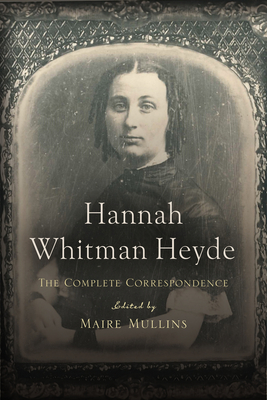 The correspondence of Hannah Whitman Heyde (1823-1908), younger sister of poet Walt Whitman, provides a rare glimpse into the life of a nineteenth-century woman. Married to well-known Vermont landscape artist Charles Louis Heyde (1820-1892), Hannah documented in letters to her mother, Louisa Van Velsor Whitman (1795-1873), and other family members, her lived experience of ongoing physical and emotional abuse at the hands of her husband. Hannah has long been characterized in biographical and scholarly studies of Whitman’s family as a neurotic and a hypochondriac—a narrative promulgated by Heyde himself—but Walt Whitman carefully preserved his sister’s letters, telling his literary biographer that his intention was to document her plight. Hannah’s complete letters, gathered here for the first time and painstakingly edited and annotated by Maire Mullins, provide an important counternarrative, allowing readers insight into the life of a real nineteenth-century woman, sister, and wife to famous men, who endured and eventually survived domestic violence.

HANNAH WHITMAN HEYDE (1823-1908), sister of the poet Walt Whitman, was the fourth child of Walter Whitman Sr. and Louisa Van Velsor Whitman. She was educated in Brooklyn, NY and Hempstead, Long Island. In 1852 she married the landscape painter Charles Louis Heyde (1820-1892), and for forty years, captured her life experience in correspondence with her family.She died at age 85 in Burlington, VT.

MAIRE MULLINS is a professor of English at Pepperdine University. As a Fulbright Scholar to Japan, Mullins taught at Tokyo Christian Women's University and Tokyo Gakugei University. Her areas of expertise include Walt Whitman, Hannah Whitman Heyde, digital humanities, religion and literature, and gender studies. She lives in Malibu, California, with her husband and daughters.

"Hannah Whitman Heyde, sister of Walt Whitman and wife of landscape painter Charles Heyde, has been dismissed as 'neurotic' or 'psychotic' by unsympathetic scholars. Mullins' edition of her correspondence brings her into clarity as a victim of long-term intimate partner violence whose primary survival strategy was writing to her adored brother and mother."
— Kenneth Price

"Hannah Whitman Heyde’s Complete Correspondence is a powerful addition to Walt Whitman family correspondence, one with which future biographers must reckon. Hannah was not a masochist, psychotic, or neurotic, though these are all ways that prominent Whitman biographers have described her. Instead, Maire Mullins’s complete collection of Hannah’s letters demonstrate that Whitman biographer consensus relies too much on the testimony of Hannah’s husband, the landscape artist Charles Louis Heyde, who is revealed in her letters as a venomous snake. Hannah’s lifelong struggle, with minimal family support, was against intimate partner psychological abuse and physical violence, and against the weight of public opinion that made the truth about her marriage unspeakable in her era. Like Virginia Woolf’s imaginary sister to Shakespeare, the great American poet Walt Whitman had a favorite sister, but much documentary evidence about Hannah’s life survives, and it tells a story with immediate relevance in the #metoo era."
— Wesley Raabe

"Maire Mullins' edition brings Walt Whitman's sister Hannah into well-deserved cultural visibility. Bravo to Mullins for this eye-opening contribution to Whitman studies and to feminist historiography. She argues persuasively that Hannah was an important member of the close-knit Whitman family."
— Vivian Pollak

“Much of the most revealing recent scholarship on Walt Whitman has been dedicated to opening up and fully humanizing the fascinating group of people who surrounded the poet throughout his life, including his wildly diverse siblings. Maire Mullins’ inspired collection of Whitman’s younger sister Hannah’s letters—along with Mullins’ chilling introductory essay about how Hannah’s life illuminates nineteenth-century intimate partner violence—bring Hannah fully and achingly to life, and, in so doing, highlight anew the deep empathy of her brother Walt, who cared for her when no one else did. The Hannah that emerges in Mullins’ eye-opening book undoes the whining one-dimensional figure that has inhabited Whitman biographies for the past century.”
— Ed Folsom