The Worst President in History: The Legacy of Barack Obama (Paperback) 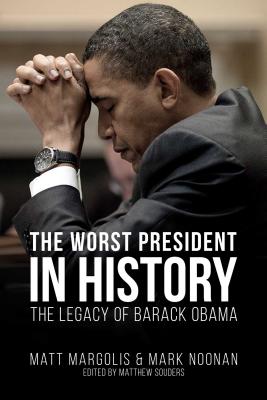 An Amazon Bestseller! The Most Comprehensive Takedown of the Obama Presidency!

“If you want to know why the history books will have a dim view of Barack Obama, this is the book to read.”—John Hawkins, Right Wing News and Townhall.com

The presumption of Barack Obama’s presidential greatness began before he even won the presidency. Now that he’s out of office, presidential “experts” and historians are ranking Obama as one of our nation’s greatest presidents, placing him amongst Washington, Lincoln, Jefferson, and Truman.

Obama’s presidency was certainly consequential, but it was by no means great.

Did Barack Obama really save America from another Great Depression? Did he really unite America or improve America’s global image? Did he really usher in a new era of post-partisanship and government transparency? Did he really expand health coverage while lowering costs and cutting taxes? Did he really make America safer and stronger than it was when he first took office? According to his supporters in the media, Hollywood, and academia, he did. But they are wrong. And they’re working aggressively to ensure their version of Obama’s legacy is written into the history books.

How can you discover and protect the truth?

Matt Margolis and Mark Noonan have compiled everything you need to know about the presidency of Barack Obama into a single source. First published in 2016, this book has now been updated to include the entirety of Obama’s presidency, and the shocking details that have come to light since he left office.

The Worst President in History: The Legacy of Barack Obama compiles two hundred inconvenient truths about Obama’s presidency—the facts that define his legacy: his real impact on the economy; the disaster that is Obamacare; his shocking abuses of taxpayer dollars; his bitterly divisive style of governing; his shameless usurping of the Constitution; his many scandals and cover-ups; his policy failures at home and abroad; the unprecedented expansion of government power...and more.

In his farewell address to supporters on January 11, 2017, Barack Obama declared, “By almost every measure, America is a better, stronger place than it was when we started.” This book destroys that narrative, putting Obama’s presidency into historical context and offering an avalanche of facts that simply cannot be ignored. All of these facts are now at your fingertips in a single source. The Worst President in History: The Legacy of Barack Obama is your ultimate guide to Obama’s real presidential record—the record he’d like history to forget.

Matt Margolis is an author, graphic designer, former architect, and a consumer of books and coffee. He lives with his family on a vineyard near Buffalo, New York.

Mark Noonan is a long-time blogger and author who resides in Las Vegas, Nevada. A U.S. Navy veteran, Mark lives with his wife, a small dog, and an astonishingly large number of books. Mark is currently working on his first novel.