The Revolution Will Not Be Litigated: How Movements and Law Can Work Together to Win (Paperback) 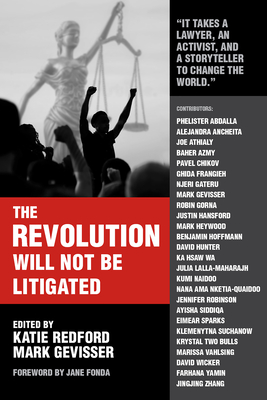 Written from the maxim "it takes a lawyer, an activist, and a storyteller to change the world", The Revolution Will Not Be Litigated shows how the law and social movements can reinforce each other in the struggle for justice and freedom.

In this book, twenty-five of the world's leading movement lawyers and activists--including political activist and actress Jane Fonda--become storytellers, and reflect on their experiences on the frontlines of the most signficant stuggles of our times. In an era where law is being abused against people, this book serves as both an inspiration and a compass to show that it is also being harnessed by and with people to bring about social justice.

The authors take you into their worlds: Jennifer Robinson frantically helping orchestrate a protest outside the Ecuadoran embassy in London to prevent the authorities from storming it and arresting her client Julian Assange; Justin Hansford at the barricades during the protests following the murder of the black teenager Mike Brown in Lawrence, Missouri; Ghida Frangieh at the barricades of Lebanon's 2019 revolution, in the detention centres trying to access arrested protestors; Pavel Chikov defending both Pussy Riot and abused prisoners in Russia; Ayisha Siddiqa, a shy Pakistani immigrant, finding community in her new home for the first time while leading the 2019 youth climate strike through Manhattan; Kumi Naidoo contemplating his mortality on a rubber dinghy in stormy Arctic seas, as he races towards a Cairn Energy oil rig Greenpeace seeks to occupy

By unearthing the origins of BLM in New York to decriminalizing homosexuality in Kenya and fighting for abortion rights in Poland to indigenous rights in Mexico and the Peruvian Amazon, contributors to The Revolution Will Not Be Litigated each grapple with the following question: Can the law be used as a tool for liberation if it was designed to serve the powerful?

Mark Gevisser is one of South Africa's foremost authors and journalists. His books include The Pink Line: Journeys Across the World's Queer Frontiers; Lost and Found in Johannesburg; and the award-winning A Legacy of Liberation: Thabo Mbeki and the Future of South Africa's Dream. His journalism and criticism has been published widely, in The New York Times, The New York Review of Books, The Guardian, Granta, and many other publications. His documentary feature film, The Man who Drove With Mandela, won a Teddy Award at the Berlin Film Festival in 1999. He was born and raised in Johannesburg, educated at Yale University, and now lives outside Cape Town. Katie Redford is a lawyer with expertise in human rights, climate change and corporate accountability. She is executive director of the Equation Campaign, which confronts the climate crisis. She was a co-founder and director of EarthRights International, where she worked to hold corporations and other perpetrators legally accountable for human rights and environmental abuses worldwide. Katie received an Echoing Green Fellowship in1995 to establish EarthRights, and has been an Ashoka Global Fellow, a Rockwood Leadership Fellow and a Bellagio Resident Fellow. Katie is a graduate of Colgate University and the University of Virginia School of Law, and a member of the Bar of the Supreme Court of the United States and the Massachusetts State Bar.