Call the Midwife: A Labour of Love: Ten Years of Life, Love and Laughter (Hardcover) 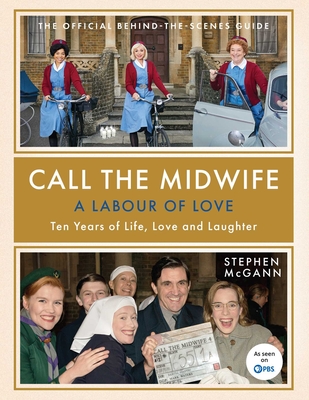 An intimate and engrossing celebration of the first ten years of the international smash-hit TV series Call the Midwife.

Learn the up-close and personal story of Call the Midwife as told by the cast and crew. A Labour of Love is a moving journey through beloved series and features personal reflections, stills of fan-favorite moments, and anecdotes and insights from co-stars, producers, technical crew, and guests.

Each chapter, spanning each of the ten years of Call the Midwife—set from 1957–1966 and filmed from 2011–2021—takes a deep dive into the themes, locations, fun times and technical challenges from each season. Author Stephen McGann, who plays the indefatigable Dr. Turner, intersperses personal interviews with key cast and crew about their feelings, thoughts, and memories of filming key moments of the drama.

MUST-HAVE FOR ALL FANS: From Trixie’s mod outfits to The Buckle’s courtship to Sister Monica Julienne’s wise words, fans of Call the Midwife will revel in favorite moments, images, stories and quotes.

EXCLUSIVE INTERVIEWS: Includes original interviews and reflections from the cast and crew.

LAVISHLY ILLUSTRATED: With stunning photos from both behind and in front of the camera, Labor of Love reveals rare behind-the-scenes moments and captures favorite scenes.

SIGNS OF THE TIMES: Like the series it commemorates, Labor of Love explores the changing attitudes of the late 50s to the mid-60s and the impact on women’s health, family life, and British culture and the realities working-class women’s life in mid-century England.

FROM THE DESK OF DR. TURNER: Author and actor Stephen McCann has played beloved Dr. Patrick Turner on all nine seasons of Call the Midwife and offers an insiders’ perspective and unprecedented access to the cast and creators.

Stephen McGann is a leading British actor, who began his professional career at nineteen, starring in the West End musical Yakety Yak. He has since worked extensively in British theatre and on screen, and can currently be seen starring as Dr. Turner in Call the Midwife. In addition to acting, Stephen has written scripts for peak-time television drama and has also been a recording artist for Chrysalis Records and Warner Brothers. In January 2016 McGann published Doctor Turner’s Casebook, a companion book to Call the Midwife, in which he revisits medical cases featured in the TV series to discuss their historical and social context. His critically acclaimed second book, Flesh and Blood: A History of My Family in Seven Maladies, was published in 2017.