The Last of the Tsars: Nicholas II and the Russia Revolution (Paperback) 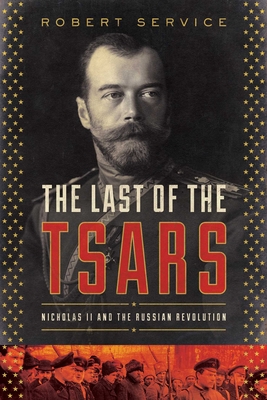 By Robert Service
Email or call for price
Out of Print

A riveting account of the last eighteen months of Tsar Nicholas II's life and reign from one of the finest Russian historians writing today.

In March 1917, Nicholas II, the last Tsar of All the Russias, abdicated and the dynasty that had ruled an empire for three hundred years was forced from power by revolution. Now Robert Service, the eminent historian of Russia, examines Nicholas's life and thought from the months before his momentous abdication to his death, with his family, in Ekaterinburg in July 1918.


The story has been told many times, but Service's deep understanding of the period and his forensic examination of previously untapped sources, including the Tsar's diaries and recorded conversations, as well as the testimonies of the official inquiry, shed remarkable new light on his troubled reign, also revealing the kind of Russia that Nicholas wanted to emerge from the Great War.

The Last of the Tsars is a masterful study of a man who was almost entirely out of his depth, perhaps even willfully so. It is also a compelling account of the social, economic and political ferment in Russia that followed the February Revolution, the Bolshevik seizure of power in October 1917, and the beginnings of Lenin's Soviet socialist republic.

Robert Service is the author of twelve books, including The End of the Cold War; Spies and Commissars; the acclaimed Lenin: A Biography; Stalin: A Biography; and Comrades: A History of World Communism. He is currently a professor of Russian history at the University of Oxford, a Fellow of St. Antony's College, Oxford, and a senior fellow at Stanford University's Hoover Institution.

Service brings forensic detail to his account of the Romanov family’s confinement and murder, mining newly available material that gives the story a you-are-there quality.

A scholarly biography that goes beyond the gruesome depictions of the Romanovs’ end to examine the more complicated nature of Nicholas II’s character. A compelling work; organized, concise, and chilling.

Service’s books are authoritative, definitive, and tell a compelling story, and this is no exception. Thanks to Service’s exhaustive and persuasive retelling, we can now separate myth and legend from the historical record.

Service, a prominent historian who has written the biographies Lenin and Stalin, now tackles Nicholas II. Service uses new evidence well, and it is clear why the Romanov dynasty came to a crushing end.