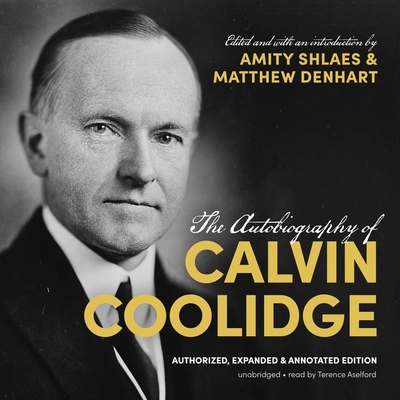 Today Americans of all backgrounds are on the hunt for a different politi-cal model. In fact, such a model awaits them, if only they turn their eyes to their own past ... to America's thirtieth president, Calvin Coolidge.

Coolidge's masterful autobiography offers urgent lessons for our age of exploding debt, increasingly centralized power, and fierce partisan division. This expanded and annotated volume, edited by Coolidge biographer Amity Shlaes and authorized by the Coolidge family, is the definitive edition of the text that presidential historian Craig Fehrman calls the forgotten classic of presidential writing.

To read this volume is to understand the tragic extent to which historians underrate President Coolidge. The Coolidge who emerges in this audiobook is a model of character, principle, and humility--rare qualities in Washington, then as now. A man of great faith, Coolidge told Americans: Men do not make laws. They do but discover them. Although he emphasized economics, Coolidge insisted on the importance of things of the spirit. At the height of his popularity, he chose not to run again when his reelection was all but assured. In this autobiography, Coolidge explains his mindset: It is a great advantage to a President, and a major source of safety to the country, for him to know that he is not a great man.

For all his modesty, Coolidge left an expansive legacy--one we would do well to study today. Shlaes and coeditor -Matthew Denhart draw out the lessons from Coolidge's life and career in an enlightening introduction and annotations to Coolidge's text.

This autobiography combats the myths about one of our most misunderstood presidents. It also shows us how much we still have to learn from Calvin Coolidge.