40 Thieves on Saipan: The Elite Marine Scout-Snipers in One of WWII's Bloodiest Battles (MP3 CD) 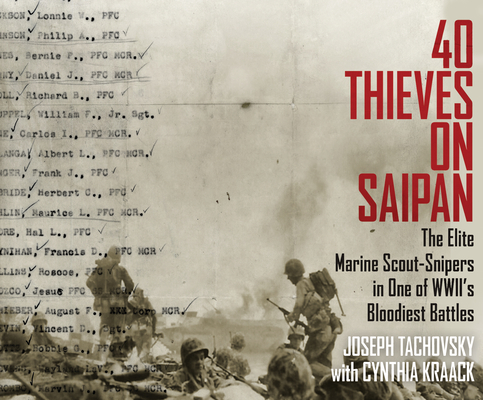 Behind enemy lines on the island of Saipan--where firing a gun could mean instant discovery and death--the 40 Thieves killed in silence during the grueling battle for Saipan, the D-Day of the Pacific.Now Joseph Tachovsky--whose father Frank was the commanding officer of the 40 Thieves, also called Tachovsky's Terrors--joins with award-winning author Cynthia Kraack to transport listeners back to the brutal Battle of Saipan. Built on hours of personal interviews with WWII veterans, their personal papers, letters, and documentation from the National Archives, 40 Thieves on Saipan is an astonishing portrayal of elite World War II combat. It's also a rare glimpse into the lives of World War II Marines. The poorest equipped branch of the services at that time, Marines were notorious thieves. To improve their odds for victory against the Japanese, they found it necessary to improve their supply chains through "Marine Methods" --stealing. Being the elite of the Sixth Regiment, the Scout-Sniper Platoon excelled at the craft--earning them the nickname of the "40 Thieves" from their envious peers. Upon returning from a 1943 trip to the Pacific theater, Eleanor Roosevelt observed, "The Marines I have met around the world have the cleanest bodies, the filthiest minds, the highest morale and the lowest morals of any group of animals I have ever seen. Thank God for the United States Marines.