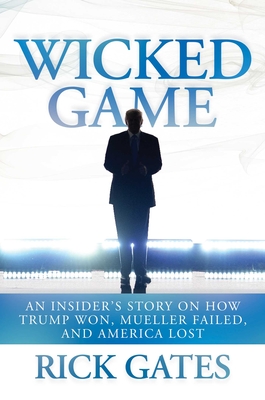 As seen on Tucker Carlson Tonight and featured in The Washington Post and Bloomberg!

In a factual firsthand account of this turbulent period in our nation’s history, Donald Trump’s 2016 deputy campaign chairman takes us deep behind the scenes to examine the truth about how Trump won, why the Mueller investigation failed, and how the current state of presidential politics is tearing apart the very fabric of our democracy.

Rick Gates, who served as Donald Trump’s deputy campaign chairman in 2016 and as a cooperating witness in the Mueller investigation, gives readers a rare, in-depth look at one of the most controversial elections—and presidents—in U.S. history.

From a perspective only he can offer, Rick answers the important questions: How was Trump able to beat sixteen high-profile, experienced Republican contenders, and Hillary Clinton, to win in 2016? How did the campaign work? What really happened with Russian election interference and the Mueller investigation? And more.

With refreshing candor, Rick shares his story, observations, and facts with the intent that readers form their own opinions and draw their own conclusions. The result is a thought-provoking account that informs and educates readers on both sides of the political aisle as we approach the 2020 election.

In up-close detail, Rick takes us through his personal journey to explain how Trump defied the odds, the polls, and even his own party to become the 45th president of the United States. He shares pivotal moments behind the scenes of the campaign and inauguration that have never been shared before, revealing critical decisions and political tactics that explain how Donald Trump was able to upset the entire Republican political establishment and beat a system built on centuries-old traditions. He also shows us how Donald Trump brought his personal brand to the presidency and how, in the end, the political establishment had no choice but to adapt to him—because Trump would never adapt to them.

Following the inauguration, Rick was entangled in the Robert Mueller investigation on Russian election interference. In Wicked Game, Rick lifts the veil to detail exactly what happened behind the operations of the Mueller probe, providing the first major account from an insider indicted in the investigation. In the government’s sentencing memo in their case against him, federal prosecutors took the unusual step of praising Rick for his “extraordinary assistance” in their efforts: “Gates has worked assiduously to provide truthful, complete, and reliable information,” they wrote. Which makes it all the more compelling when Rick’s account reveals the inadequacies of our legal system, and how a small group of people in Washington manipulated the political system for their own purposes—undermining our democracy in the process.

History has its eyes on America, and as people all over the world try to understand Trump’s presidency in a time of global crisis and uncertainty heading into the 2020 election, Rick’s powerful, firsthand account provides revealing and factual insights that he hopes Republicans and Democrats alike will learn from and apply as our nation moves forward.

Rick Gates rose through multiple senior roles in Donald Trump’s campaign starting in March 2016, serving as deputy convention manager and rising to deputy campaign chairman. Following Trump’s successful election he continued his service as the deputy chairman to the president-elect’s Inaugural Committee, and after, as a co-founder of the America First Super PAC for the president. During this time, he was witness to many incredible moments of history that will define presidential politics for years to come.

“…the most illuminating book about Donald Trump and 2016 and the Special Counsel of all of the books….”
— Hugh Hewitt, The Hugh Hewitt Show