It Takes a Revolution: Forget the Scandal Industry! (Paperback) 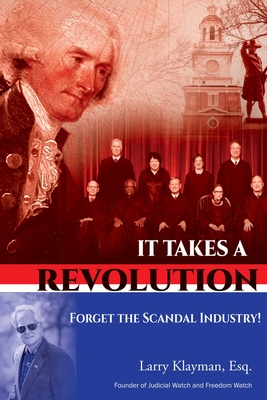 How to wage a peaceful revolution to restore rule of law, ethics, and morality to the nation.

With a title that satirically mocks It Takes a Village by Hillary Clinton, It Takes a Revolution: Forget the Scandal Industry! details how our executive, legislative, and judicial branches of government have become thoroughly corrupt and failed the citizenry.

Imploring Americans to turn away from the “scandal industry” of the cable news networks, which enrich themselves by magnifying crises—if not creating mass panic to boost ratings and advertising dollars—and offering false hope to lure viewers that there will be justice to remedy government corruption, the author Larry Klayman, both the founder of Judicial Watch and now Freedom Watch, offers concrete solutions for creating a federal judiciary and instituting citizens’ grand juries. Quoting Founding Fathers like John Adams and Thomas Jefferson, Klayman explains above all that without ethics, morality, and religion, it will not matter how many times we change our forms of government or rules—there will be no lasting liberty.

This work is a call to arms during these times of crises, when government corruption has hit a “cancerous state.” The overriding message of It Takes a Revolution: Forget the Scandal Industry! is that Americans should turn off cable news, stop being entertained by it, get up off of the couch, and join the second American Revolution—albeit a peaceful and legal one—to restore the greatness of our nation in these trying and perilous times. Our continued existence hangs in the balance!

Larry Klayman, Esq., founder and former chairman of the successful non-profit foundation Judicial Watch, has dedicated his career to fighting against injustice and restoring ethics to the legal profession and government. He was born and raised in Philadelphia, graduated with honors in political science and French literature from Duke University, and later received a law degree from Emory University. He is the only lawyer ever to have obtained a court ruling that a U.S. president committed a crime, which occurred during his tenure at Judicial Watch. He became so well known that NBC’s hit drama series The West Wing created a character inspired by him, named Harry Claypool of Freedom Watch. In 2003, Mr. Klayman left Judicial Watch to run for the U.S. Senate. After his Senate race, he established Freedom Watch. As head of that organization and his law firm Klayman Law Group, P.A., he now divides his time between South Florida, Los Angeles, and Washington, DC.

"Larry Klayman is a fearless advocate who defeated special counsel Muller's 'deep state' attempt to have me testify against President Trump by threatening me with prosecution if I did not lie under oath. I am eternally grateful to him! He is a true champion of justice!"
— Dr. Jerome Corsi, New York Times Bestselling Author

"I have known Larry Klayman for many years as a friend and as my lawyer. He's a straight shooter and a patriot. We need more people like Larry in the legal profession."
— Sheriff Joe Arpaio

"Larry Klayman is a uniquely public-spirited lawyer. He has never lost sight of the fact that the responsible activity of individual citizens, seriously seeking to exercise their God-endowed rights, is the indispensable energy source for all our institutions of self-government."
— Ambassador Alan L. Keyes, Former UN Ambassador and Presidential Candidate

"Larry Klayman is my hero because he has integrity—enough to prevent him from blind loyalty to party or ideology... That's because he is fearless and relentless in the pursuit of justice... There were other men like Larry early in American history. Their names were Washington, Jefferson, Madison, and Henry."
— Joseph Farah, CEO, www.wnd.com

"That Time magazine has yet to name Larry Klayman 'Man of the Year' is a failure of Time, not Klayman's."
— Jack Cashill, Bestselling Author of "Ron Brown's Body"

"Larry Klayman stood in the stead for my family and me under very trying circumstances. He is persistent, loyal, and a great believer in the Constitution, as my sons and I are as well. I respect his wisdom and strength and cherish his friendship."
— Cliven Bundy, Nevada Rancher

"While others talk of corruption and injustice in our federal courts, Larry Klayman is a man who has done something about it. As founder of Judicial Watch and Freedom Watch, Larry Klayman became a household name to those of us who want to stop the runaway power of federal judges and restore honesty and integrity to our federal court system. Echoing the sentiments of our Founding Fathers like Thomas Jefferson and James Madison, Larry Klayman has fought for a return to the principles and foundation of our Constitutional Republic wherein people are the source of all power. With over forty years of experience in the practice of law, Larry Klayman has represented defendants across America in defense of their right to 'life, liberty, and the pursuit of happiness.' Larry is a valiant warrior for truth and justice, and a man I am proud to call my friend. I hope that you will enjoy his noble work, It Takes a Revolution: Forget the Scandal Industry!"
— Chief Justice Roy Moore

"I admire Larry because he is first and foremost a patriot. He not only believes in the words of the Constitution, he practices those words in all of his endeavors. He was there when I needed him."
— Laura Luhn, Sexual Abuse Victim of Roger Ailes

"Larry Klayman is one of the most principled and intellectual minds in the world of litigation. He believes in fighting for justice at all costs to protect our constitutional freedoms! I am honored to be able to call him a friend and mentor. God brings people into your life for different reasons. I believe that God connected us because he wanted me to have a big brother to encourage me to maximize my potential and guide me in the right direction. Thank you, Larry!"
— Sergeant Demetrick Pennie, President of the Dallas Fallen Officer Foundation

"Larry Klayman was the only attorney who had the guts to stand beside us and go against the government to get answers when our son, Michael was killed in Afghanistan aboard Extortion 17 on 08/06/2011. Larry is a bulldog in the courtroom! He helped us win against the NSA, the first time in American history!"
— Charles Strange, Gold Star Father of PO1 Michael Strange (DEVGRU)