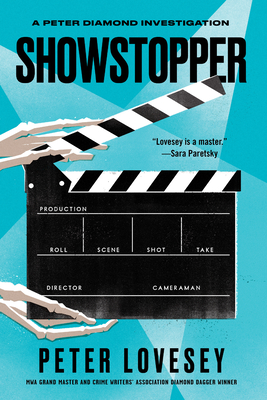 This is book number 21 in the A Detective Peter Diamond Mystery series.

The cast and crew of a hit British TV show are rumored to be cursed—but are these spooky deaths coincidences or murder? It's up to Bath detective Peter Diamond to find out.

In the six years since the start of the hit British TV show Swift, its cast and crew have been plagued by misfortune, beginning with the star actress’s pulling out of the show before it began. By now there have been multiple injuries by fall, fire, or drowning; two deaths; and two missing persons cases.

The media quickly decides it’s a curse, but who’s to say there isn’t a criminal conspiracy afoot? Now that the filming has moved to Bath, Peter Diamond, Chief of the Avon and Somerset Murder Squad, is on the case. While the investigation into one fatal accident is underway, a cameraman goes missing, challenging even the most credulous to wonder if he might have been the victim of foul play rather than a jinx. How can so many things go wrong on one set in such a short time?

Complicating already complex matters is the fact that Diamond’s boss is trying her best to get him out of her hair; he may be forced to retire if he can’t solve the case. Will this be the end for Peter Diamond?

Peter Lovesey is the author of more than thirty highly praised mystery novels. He has been named a Grand Master by the Mystery Writers of America and has been awarded the CWA Gold and Silver Daggers, the Cartier Diamond Dagger for Lifetime Achievement, the Strand Magazine Award for Lifetime Achievement, the Macavity, Barry, and Anthony Awards, and many other honors. He lives in Shrewsbury, England.

“More than 30 years into this series, Lovesey shows no signs of losing steam or ingenuity.”
—Publishers Weekly, Starred Review

“Lovesey is careful to remind us that Bath holds hidden secrets behind its gracious Georgian architecture . . . Light and dark imagery is a fixture of Lovesey’s Bath novels, in which life is lived on many levels, some in full sunshine and others buried in shadow.”
—The New York Times Book Review

“With Peter Lovesey in the world, why does anyone else bother writing mysteries at all?”
—Mystery Scene Magazine

“Peter Lovesey’s storytelling skills, and certainly his gift for constructing a fair play puzzle, match those of the finest exponents of Golden Age fiction.”
—Martin Edwards

“We're treated to Lovesey's enchanting style . . . urbane wordplay and sucker-punch plotting. Don't believe anyone who says, ‘I knew it all along.’”
—Booklist