Canary in the Coal Mine: A Forgotten Rural Community, a Hidden Epidemic, and a Lone Doctor Battling for the Life, Health, and Soul of the People (CD-Audio) 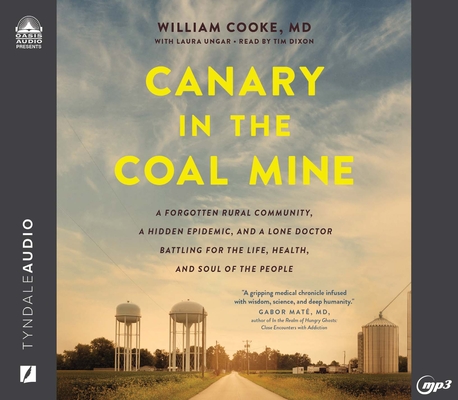 One doctor’s courageous fight to save a small town from a silent epidemic that threatened the community’s future—and exposed a national health crisis.
When Dr. Will Cooke, an idealistic young physician just out of medical training, set up practice in the small rural community of Austin, Indiana, he had no idea that much of the town was being torn apart by poverty, addiction, and life-threatening illnesses. But he soon found himself at the crossroads of two unprecedented health-care disasters: a national opioid epidemic and the worst drug-fueled HIV outbreak ever seen in rural America.

Confronted with Austin’s hidden secrets, Dr. Cooke decided he had to do something about them. In taking up the fight for Austin’s people, however, he would have to battle some unanticipated foes: prejudice, political resistance, an entrenched bureaucracy—and the dark despair that threatened to overwhelm his own soul. : Canary in the Coal Mine is a gripping account of the transformation of a man and his adopted community, a compelling and ultimately hopeful read in the vein of Hillbilly Elegy, Dreamland, and Educated.

William Cooke, MD, FAAFP, AAHIVS is a Fellow of the American Academy of Family Medicine, specializing in family medicine, addiction medicine, and HIV medicine. He has received national recognition for his work serving the rural community of Austin, Indiana, with limited resources. His work has been covered by CBS, NBC, PBS, the BBC, USA Today, the New York Times, NPR, and others. He was named Family Physician of the Year by the Indiana Academy of Family Physicians in 2016 and the National Physician of the Year by the American Academy of Family Physicians in 2019. In 2019, he joined the ranks of two US Surgeon Generals and a former Secretary of the US Department of Health and Human Services by receiving the Ryan White Distinguished Leadership Award. He lives outside of Austin, IN with his wife Melissa and six children.