The Crossroads of Civilization: A History of Vienna (Hardcover) 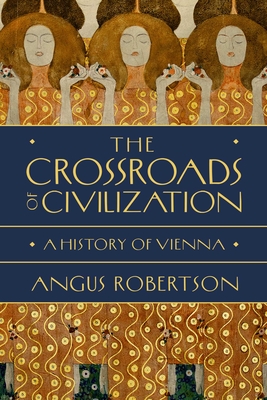 A rich and illuminating history of the world capital that has transformed art, culture, and politics.

Vienna is unique amongst world capitals in its consistent international importance over the centuries. From the ascent of the Habsburgs as Europe's leading dynasty to the Congress of Vienna, which reordered Europe in the wake of Napoleon's downfall, to bridge-building summits during the Cold War, Vienna has been the scene of key moments in world history.

Scores of pivotal figures were influenced by their time in Vienna, including: Empress Maria Theresa, Count Metternich, Bertha von Suttner, Theodore Herzl, Gustav Mahler, Adolf Hitler, Josef Stalin, John F. Kennedy, and many others. In a city of great composers, artists, and thinkers, it is here that both the most positive and destructive ideas of recent history have developed.

From its time as the capital of an imperial superpower, through war, dissolution, dictatorship to democracy Vienna has reinvented itself and its relevance to the rest of the world.

Angus Robertson began his journalistic career with the Austrian Broadcasting Corporation (ORF) and also reported from Vienna for National Public Radio, the BBC, Ireland’s RTÉ and other leading broadcasters. In 2016 he was awarded the Decoration of Honour for Services to the Republic of Austria, the country’s highest national honour. From 2001 to 2017 he was a member of the UK House of Commons and in 2021 was elected as Member of the Scottish Parliament for Edinburgh Central. He is currently Cabinet Secretary for the Constitution, External Affairs and Culture in the Scottish government.

"From the 13th century till the end of World War I, a Habsburg ruled the Austro-Hungarian Empire with Vienna as its capital city. No other royal dynasty has a record that can match that of the Habsburgs. Mr. Robertson holds that the key to the Habsburgs’ greatness was sheer continuity and the stability that comes with it; he even ascribes to them a sense of mission. There is something valid in Mr. Robertson’s endorsement of the city as a civilizational crossroads.”

"Former journalist and current Scottish Parliament member Angus Robertson’s 'The Crossroads of Civilization: A History of Vienna' provides readers with a deep background on this glittering city. A terrific, engaging read across 2,000 years, from the city’s beginnings as a Roman military fort known as Vindobona to its membership in the European Parliament."

"By our reckoning, there are two kinds of people: folks who consider Vienna their favorite city, and those who have yet to visit it. Either group would profit enormously from reading Angus Robertson’s book, which chronicles the city’s emergence as Europe’s pivotal city in art, music, and politics, not to mention psychoanalysis."
— Air Mail

"While there are innumerable histories of Paris, London, or Berlin, there are comparably few of Vienna, which after reading The Crossroads of Civilization is all the more remarkable. Vienna is indeed a crossroads for so much and so many. This is the story that Robertson tells in such a vivid and enthusiastic fashion. In the end, the greatest joy of Robertson’s book is his palpable joy and fascination with his subject. Robertson pens a love letter to Vienna, a city he so thoroughly enjoys."

"[Angus Robertson's] love for the city is apparent in this panoramic account of Vienna as a cultural, intellectual, and political capital of Europe."
— The New Criterion

"[Angus Robertson ]has written a thoroughly enjoyable history of Vienna which is both accurate and entertaining. A journalist, former British MP, and currently a Scottish cabinet secretary, he writes with both detail and panache about compelling people and events that deserve better than mere mention en passant. His history capably illustrates how the city’s conservative past evolved into a problematic modernity. The Crossroads of Civilization is comprehensive about its various transformations without straying into the exhaustive."
— The Arts Fuse

"Scottish MP Robertson, a former broadcast journalist based in Vienna, debuts with a sweeping history of the Austrian capital from its ancient Roman roots to the present day....This sparkling history enlightens and entertains."
— Publishers Weekly

"Robertson leads readers through the labyrinthine politics associated with the city and notes the many famous figures—Mozart, Freud, Hitler, Stalin, Mahler, Klimt—who lived there at one time or another. Robertson does a good job of keeping the complicated narrative straight...A pleasing mix of epic sweep and meticulous research."
— Kirkus Reviews

"What an enjoyable cosmopolitan and exuberant celebration of Vienna by a someone who really knows and loves that great city.”
— Simon Sebag Montefiore, author of Jerusalem and The Romanovs