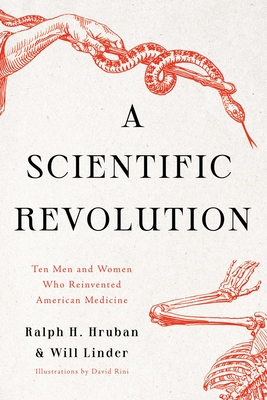 A prismatic examination of the evolution of medicine, from a trade to a science, through the exemplary lives of ten men and women.

Johns Hopkins University, one of the preeminent medical schools in the nation today, has played a unique role in the history of medicine. When it first opened its doors in 1893, medicine was a rough-and-ready trade.  It would soon evolve into a rigorous science. It was nothing short of a revolution.

This transition might seem inevitable from our vantage point today. In recent years, medical science has mapped the human genome, deployed robotic tools to perform delicate surgeries, and developed effective vaccines against a host of deadly pathogens. But this transformation could not have happened without the game-changing vision, talent, and dedication of a small cadre of individuals who were willing to commit body and soul to the advancement of medical science, education, and treatment.

Dr. Hruban has received numerous awards including the Frank H. Netter Award for Special Contributions to Medical Education and the 2013 Johns Hopkins University Distinguished Alumni Award. In 2013 he was elected a member of the German National Academy of Sciences Leopoldina. Dr. Hruban has also received five teaching awards from the Johns Hopkins University School of Medicine.

Dr. Hruban has written more than 800 scientific papers and eight books. He produced an award-winning documentary on the life of the surgeon William Stewart Halsted

Will Linder is a Chicago-based writer and editor. He is a Phi Beta Kappa graduate of the Johns Hopkins University Krieger School of Arts and Sciences, where he majored in history. In addition, he holds master’s degrees in business administration and liberal arts from the University of Chicago. Will has had a long career in business, academic, and journalistic writing. He serves on the Johns Hopkins University Alumni Council and the Krieger School’s Humanities Advisory Council. Will is also a huge Blue Jays lacrosse fan.

"The transformation of American medicine into the science-driven discipline we know today is largely attributable to a single institution, Baltimore’s Johns Hopkins University School of Medicine, and to the women and men who breathed life into it. Their stories form the center of A Scientific Revolution, an uplifting collection of biographical vignettes by Hopkins pathologist Ralph Hruban and writer Will Linder. Dr. Hruban and Mr. Linder’s portraits capture an inflection point in American medicine: the ambition and excitement of it, the sense of moment experienced by those who were leading the revolution.”

"Ralph Hruban and Will Linder's history of medical advances through the lives of medical pioneers is a fascinating history that should be read by every American who enjoys the benefits of modern medicine. This is biological history at its best."

"An enthralling and honest history of the first century of scientific medicine in the form of penetrating portraits of ten pioneers. Overcoming obstacles that included addiction, deafness, rampant sexism, vicious racism and hard-shelled tradition, the ten made possible the medicine of today. Their courage and resilience are a bracing example."
— Scott Shane, former New York Times reporter, author of Dismantling Utopia and Objective Troy and winner of the Pulitzer Prize

"The legendary Johns Hopkins Hospital has finally found its bards; their names are Ralph Hruban and Will Linder… My prescription… is to turn the page and begin reading the sterling essays on the medical disrupters that follow. I am confident that all who do, will savor every chapter."
— From the Foreword, Howard Markel, MD, PhD, George E. Wantz, MD Distinguished Professor of the History of Medicine and Director, Center for the History of Medicine, The University of Michigan Medical School

"The names Edison, Einstein and Pasteur stand out as inventors, trailblazers and visionaries who changed our world. But in the field of medicine, there are other names we should know. Over a century ago, these ten men and women pioneered how doctors were trained, developed techniques for modern surgery, addressed hygiene issues, and more, all while making great personal sacrifices and enduring hardship. Together, their contributions were transformative. These engaging profiles by Ralph Hruban and Will Linder show how the collective impact of these four women and six men laid the foundation for today’s rigorous standards for patient care and clinical research."
— David Louie, Emmy Award winning Business & Technology Reporter, ABC7 News Bay Area, and past national chairman of The National Academy of Television Arts & Sciences

"From the late nineteenth to the mid-twentieth century, the Johns Hopkins Medical Institutions pioneered new procedures and treatments that put patients’ health, comfort, and safety foremost. Beginning with John Shaw Billings, who witnessed firsthand the horrors of Civil War medicine and who subsequently gave hospitals their first modern design, to Vivien Thomas, a son of enslaved people, who tolerated bitter racial discrimination while pioneering new procedures in heart surgery, here are ten compelling portraits of men and women engaged in a great scientific revolution."


— Ric Cottom, historian and host of WYPR’s “Your Maryland”

“This book’s strength lies in the honesty of its storytelling. Hruban and Linder bring us into a world where institutional politics, sexism, and racism created severe barriers not only to health equity but to scientific accomplishment.”—
— Jon LaPook, MD, Chief Medical Correspondent, CBS News, Professor of Medicine, NYU Langone Health

“Hruban and Linder's portraits form striking and accountable medical history that spotlights both discrimination and groundbreaking contributions, including those valiantly made by individuals who overcame prejudice and other obstacles.”
— Booklist