Everest 1922: The Epic Story of the First Attempt on the World's Highest Mountain (Hardcover) 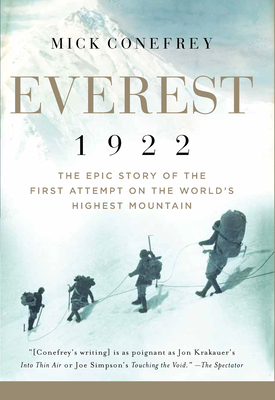 The dramatic and inspiring account of the very first attempt to climb Mount Everest, published to coincide with the centenary of the expedition of 1922.

The first attempt on Everest in 1922 by George Leigh Mallory and a British team is an extraordinary story full of controversy, drama, and incident, populated by a set of larger-than-life characters straight out of an adventure novel.

The expedition ended in tragedy when, on their third bid for the top, Mallory's party was hit by an avalanche that left seven men dead. Using diaries, letters, and unpublished accounts, Mick Conefrey creates a rich, character-driven narrative that explores the motivations and private dramas of the key individuals—detailing their backroom politics and bitter rivalries—who masterminded this epic adventure.

Mick Conefrey is an award-winning writer and documentary film maker. He created the landmark BBC series The Race for Everest to mark the sixtieth anniversary of the first ascent. His previous books include The Adventurer’s Handbook; Everest 1953, the winner of a Leggimontagna Award; and The Ghosts of K2, which won a U.S. National Outdoor Book Award. Conefrey lives in England.

"Beyond telling this overlooked story with verve and precision, Mr. Conefrey shows how the 1922 expedition anticipated many of the preoccupations of modern mountaineering...The book is a nuanced, highly readable chronicle of the first attempt on the summit 100 years ago."

"Typical of work by an experienced writer who is also comfortable in crampons and spikes, Everest 1922 is authoritative, highlighting small but aggravating conditions, such as frozen-solid cans of spaghetti, as well as the sudden rise of life-threatening winds and storms. A dramatic, often breathtaking ascent."
— Historical Novel Society

“George Mallory’s first attempt to summit Mount Everest, in 1922, was more significant than the better-known 1924 expedition that took his life, according to this captivating account Conefrey draws vivid sketches of the mountaineers—including Mallory, Edward Norton, and Howard Somervell, who shared a “flask of brandy” when they broke the world altitude record—and details disagreements over the expedition’s third and final attempt to reach the summit, which triggered a deadly avalanche. This immersive chronicle restores an overlooked expedition to its rightful place in mountaineering history.”
— Publishers Weekly

"Everest 1922 is an enjoyable romp through the pioneering days of Himalayan mountaineering and an engaging and sympathetic portrayal of the almost forgotten 1922 Everest expedition."
— Asian Review of Books

“The 1922 expedition was perhaps the most exciting of all Everest ventures. With his usual forensic analysis and keen eye for the previously untold anecdote, Mick Conefrey re-illuminates one of the greatest mountain adventures of all time.”
— Stephen Venables, author of Everest: Alone at the Summit and First Ascent

Praise for Ghosts of K2:

"In this wonderful book Mick Conefrey manages to turn the sound of tragedy into a celebration of hope, a triumph of the spirit.”
— Wade Davis, author of Into the Silence: The Great War, Mallory and the Conquest of Everest

“The stories of the early attempts and the eventual success illustrate the complexity of the mountain and the climbers who chose to risk it all. Ghosts of K2 brings them back to life."
— Peter Edmund Hillary, mountaineer, expedition leader, and author

"K2, as I know from personal experience of climbing it, is a seriously dangerous mountain. This book engagingly portrays its grim, fascinating, tragic history.”
— Alan Hinkes OBE, author of 8000m: Climbing the World’s Highest Mountains

"A thorough and well-researched book which tells the ‘inside’ story of an often misunderstood expedition. Essential reading for anyone with a fascination for Everest.”
— Matt Dickinson author of The Death Zone: Climbing Everest Through the Killer Storm