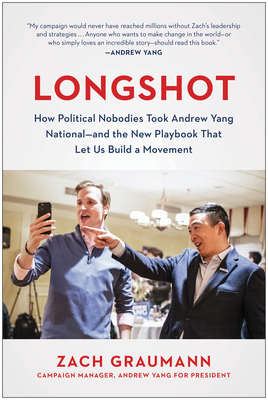 In Longshot, Andrew Yang’s campaign manager takes you on a tour through the ups, the downs, and the math of Yang’s 2020 campaign for president, and shares the playbook his team used to navigate the attention economy.

Andrew Yang did not win the 2020 Democratic primary, let alone the presidency of the United States. But chances are you know who Andrew Yang is, and you may well be part of the 75 percent of Americans who now support Universal Basic Income—both facts that would have seemed beyond unlikely at the start of Yang’s campaign. That campaign was helmed by Zach Graumann: entrepreneur, marketing expert, and, at the time, political nonentity. In fact, when Graumann joined Yang 2020, no one on the team was an expert in campaigning, but they all shared a fervent desire to change the future.

Yet, despite that inexperience, by the time Yang dropped out of the race in early 2020, he’d not only outlasted six senators, four governors, and three members of Congress, he’d become one of the most recognizable, popular political figures in the country.

Now, for the first time, Graumann tells the story of how Yang went from nobody to national presence, breathing life into the behind-the-scenes antics of the unusual campaign that started a movement. In the process, he demystifies the world of political campaigns and provides takeaways that will help not only the next generation of campaign managers, but anyone who wants to break into a new industry—or stand out in their current one.

A book for everyone from members of the Yang Gang who want the inside story to businesspeople looking for self-improvement to anyone who has ever had a dream that felt bigger than they were, Longshot reminds you that sometimes, longshots aren’t quite as long as you think.

Zach Graumann is an entrepreneur, political operative, marketing expert and a former Wall Street Executive. Most recently, he was the Campaign Manager for Andrew Yang's 2020 presidential campaign, leading the campaign from being called "longer than long shot" according to the New York Times in February 2018, to a top-five contender nationwide who “hacked the primary” (Business Insider) in less than a year. Through innovative marketing strategies that the political world had never seen before—including appearances on podcasts like the Joe Rogan Experience and The Breakfast Club, the creation of the "Yang Gang" volunteer base, and identity branding through MATH hats and merchandise—Zach helped Andrew develop over 3 million combined social media followers, build a 200-person staff, and become one of the most exciting stories in the 2020 race. Raising nearly $40 million dollars in an average of $35 increments, Andrew's nationwide support propelled him to seven Democratic primary debates, outlasting six senators, four governors, three members of congress, two mayors and one secretary. According to CNN, their campaign "didn't just make history... [it] unquestionably put a sizable dent in the future as well."

Zach is also the cofounder and chairman at SuitUp, an education non-profit organization that brings companies into the classroom to increase career awareness and marketable skills for low-income students. The organization has hosted hundreds of events nationwide with companies including Goldman Sachs, Conde Nast, NBCUniversal, and LinkedIn, impacting more than 10,000 students across the country. Prior to entering politics, Zach was the Head of Client Philanthropy Solutions at UBS Wealth Management Americas, giving advice to ultra-high net worth individuals and families across the globe for the #1 ranked Global Bank for Philanthropy (Euromoney, 2014-16). Zach and his work have been featured in The New York Times, Business Insider, The Washington Post, Rolling Stone, POLITICO, CNN, The Daily Beast, and The Late Show with Stephen Colbert.